Sixty-Years: The Young and Old of It All

Posted on September 18, 2019 by thebeauchemins

On June 23, 2019, seventy-eight members of the Hudson-Champlain Porsche club gathered at the Saratoga Auto Museum to begin the celebration of the 60th anniversary of the club. Sponsors included Brewtus Coffee by owner and member Steve Pivonka of Delmar, NY, The Saratoga Auto Museum, New Country Porsche of Clifton Park and R&D Automotive Bavarian Rocket Science of Albany. The smell of coffee mingled with the fresh air as members gathered. 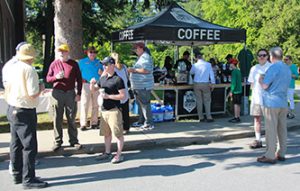 Some chose to tour the museum while others opted to chat, but by at 10:30 a.m. sharp a parade of Porsches left the museum and headed north for a leisurely drive through the Adirondacks with a destination of Lake George’s Fort William Henry Hotel and Conference Center. 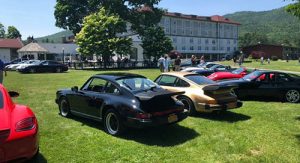 The atmosphere was lively as the cars were parked around the lawn to be judged and awarded by sponsors New Country Porsche and R&D Automotive.  Club members sat on the veranda sharing cocktails and conversation on what many agreed was an absolutely perfect weather day.

When the judging was over, everyone wandered inside to have lunch and applaud the winners. Afterward, club leadership talked about the history of the club, and historian, Andy Dorman, discussed the items on the display table in the front of the room, which included the club charter and the citation from the Porsche Club of America in recognition of our 60th Anniversary. 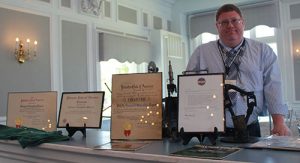 When the petition for charter was presented back in 1959 to the then president of PCA National, Earl Kirschbaum, eight counties in New York, one in Vermont and one in Massachusetts were included in the area chartered as the Hudson Champlain Region on July 17, 1959. The club originally extended from the Canadian border south, well into the Hudson Valley and over to and including southern Vermont and western Massachusetts. Ten founding members accepted the charter most from the Capital Region.

During the first years of the club, Paul Heinmiller, one of the club’s first members, became the editor of Porsche Panorama. Under Paul’s leadership, Panorama was transformed from what was essentially a newsletter into what came to be regarded as one of the finest publications of its kind. For a time, Paul held the office of the PCA National Vice Present, National Executive Vice President, but declined the job of PCA National President as it would have meant leaving his job as the Panorama editor.

The first change in the club’s territory came in 1975 when the Hudson Valley region was chartered. That club was formed by counties seeded from both the Hudson-Champlain and the Metro New York region.

The most recent change came in 1986 with the formation of the Green Mountain region. That club was formed by encompassing the counties in Vermont and New Hampshire. All of this brings us to our current configuration with Zone 1, which can be seen below. 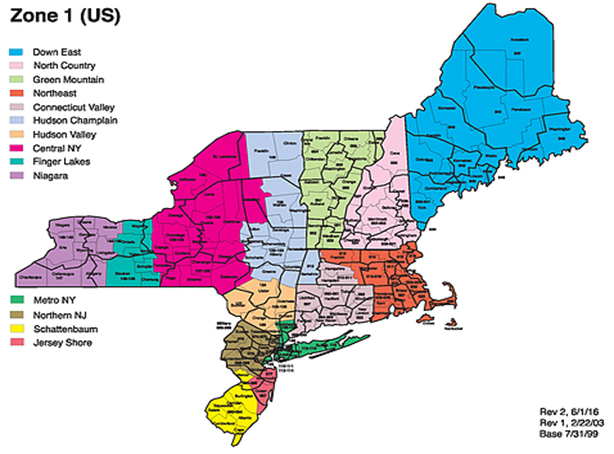 The shaded areas on the map below illustrate the counties within the Hudson-Champlain Region. 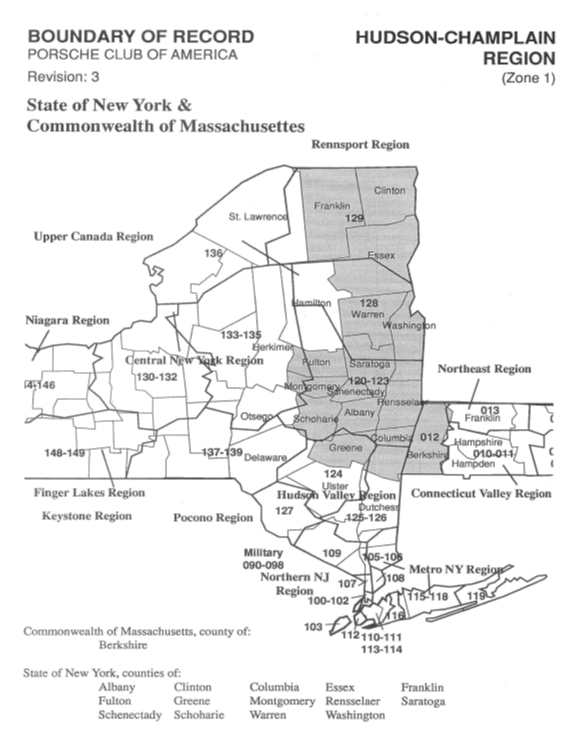 As the afternoon wound down and members began gathering their belongings, they were reminded to give a wave to the other Porsches on the road. Or if you get the opportunity to introduce yourself, even better! Most owners enjoy sharing the story of their cars, and they may be interested in becoming part of our growing family! 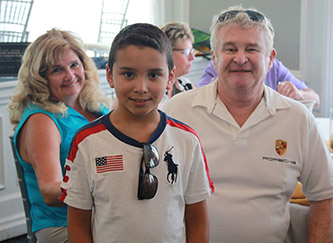 Here’s to another fantastic 60 years of the fun and friendship with the Hudson-Champlain Porsche Club.