Nothing to Do… And All Day to Do It 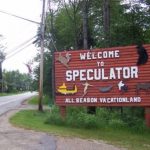 One of the by-products of owning a performance car is the sense of restlessness and the insatiable urge to be behind the wheel. So it should come as no surprise when I had a Saturday with nothing to do and all day to do it, I included my ’14 Boxster S in the plan.

After meeting club blogmeister Gary Richards for a cup of coffee and a quick rundown on how to operate the Club’s blog (so this is essentially a trial piece), I set my sights on a road trip to Speculator, with the “excuse” of trying a cheeseburger at the aptly named Inn at Speculator.

The drive up was pretty relaxing; despite encountering some slow pokes along the west coastline of Great Sacandaga Lake. Once I got north of Northville, it seemed as if Route 30 was all mine. Nice drive, but nothing overly unusual and not much to see as I buzzed through the Town of Wells. It’s obvious that the area is still a few weeks away from entertaining visitors, but the Inn at Speculator was open and — being a connoisseur of cheeseburgers — the one served at the Inn was worth the trip. My “excuse” was satisfied.

Some might suggest the cheeseburger put me in a good mood, but I will state for the record the back half of my drive was nothing less than impressive and made the day’s adventure well worth it! From Speculator, I continued west on Route 8 through Lake Pleasant and Higgins Bay before heading south on Route 10. That’s where I found something that might resemble a drive in Bavaria! The trip through the Adirondack Park was perfect for winding up the car and letting the suspension do the rest, with tree-lined sloped twists and turns. And for most of the trek, I saw nary a car (including law enforcement). Aside from the overcast skies, it was perfection; complimented by a Bose-enhanced soundtrack that spanned four decades of music. It was for a moment like this I invested in Stuttgart, Germany’s finest export.

It is a trip I highly recommend on a day where you’re restless and without a plan. Depending on your starting point, you’re looking at anywhere between 90 minutes and 2 hours each way, with about 45 minutes to enjoy a cheeseburger, of course. Plenty of small lakes align the drive. Names like Algonquin, Pleasant, Oxbow, Canada, Caroga and Peck Lake dot the journey.

And for those of you who have indulged me by reading this far along, I must confess, it only took 75 minutes to get back from Speculator (although the second half of the drive was a longer distance); perhaps fueled by my heavy foot and the musical sampling below:

This entry was posted in For Our Members, Great Drives. Bookmark the permalink.