New gadgets from a rearview perspective

A nice treat are the Cars & Coffee hosted by Porsche of Clifton Park; but as more than one club member can tell you, these gatherings can get expensive.  It was at such an event, in March 2016, that we saw the 2013 Boxster S we’re now driving.  Less than a week later, it was in our driveway.

It’s a wonderful car — with one notable exception.  With its high seat backs and enveloping cockpit, rear visibility is woefully inadequate. Since many Club members back into parking spaces, we decided we needed to do something about the view aft if we were going to adopt the Porsche parking ritual.  If we only had a backup camera.

I began a search, hoping to find a camera that could be wired to the nav display in our car’s PCM unit.  Most local installers work with a company called NAV-TV, so I gave them a call. Turns out they offer a couple of options for Boxster owners.  One is a unit that’s relatively easy to install, but not suitable for all Boxsters.  Mount a camera, connect it to NAV-TV’s device, make the connection to the PCM unit and you’re good to go.  Anyone with a modicum of mechanical savvy (count me out) could probably do the job.  The other option is for experts only, as NAV-TV recommends pulling the PCM module and shipping it to them for modification. Big bucks here.  Unfortunately, even though our cars a ’13, our PCM unit was one generation too old for either of the NAV-TV options.

So, on to Google Chrome I went.

A few of hours of plugging search terms into the browser turned up the only possible solution; a rearview mirror that could display an image from a backup camera.  Sounded good but there were flies in this ointment as well as the installation process became much more complicated and it was uncertain we could find a mirror that would be compatible with the mount in our car.  What’s worse, most of the mirrors on the market would look better in a semi than in a Porsche.

Finally, working a great tech guy at Boyo [Vision Tech America], we found our mirror; a unit called the Carkuda.  It’s reasonably stylish but its appeal goes beyond aesthetics.  The mirror is actually an Android device with built-in navigation and the ability to runs apps such as Waze when paired to a phone acting as a Wi-Fi hotspot.   Not sure we’ll set the mirror up this way; but, we’ll certainly use its built-in camera that can record drives in 1080 resolution.  Our mirror is connected to a small, virtually invisible rear lip mounted camera that provides a backup image with guidelines. Installing this myself was out of the question and I didn’t have full confidence in some of the audio/video installers I talked with during my research, so I gave the guys at R&D Automotive a call.  They sent me where they’ve sent a number of other customers — Tint World on Central Ave, in Albany.  After a five-hour installation, the camera and mirror were in and working well.

I tried the recorder for the first time the other day.  If you have ten minutes to kill, the video of a drive up and down the ridgeline that runs from Scotia to Amsterdam on the northern side of the river has been posted immediately below:

The roads, Johnson and Waters, are two of the most challenging driving roads in the area (They’re included in the Glenville Hills-Charlton drives that can be found on the blog under Great Drives).  It’s my first attempt with the camera and there are some bugs to work out.  The top was down so there’s glare along with wind noise.  But the video gives some idea of how interesting these roads are.  I will say, though, with their numerous turns and elevation changes Johnson and Waters look far more challenging when you’re behind the wheel than when watching a video of the drive.  Waters is particularly dicey.  The road is narrow in spots and many of the curves are sharp with limited visibility of on-coming traffic.  With the exception of a couple of rough spots on Waters, the road surfaces are good.  There are no posted speed limits but there are homes along the roads, particularly on Waters, so I kept my speed down.

The final verdict on all of this; rear visibility in our car still could be better; but the camera and mirror make a big difference. The time, effort and expense involved were worth it.  Look for us backing up at the next Club event! 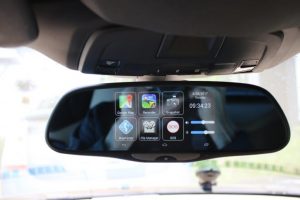 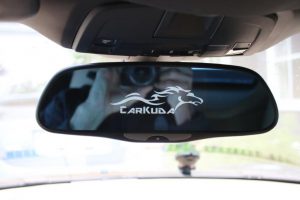 This entry was posted in For Our Members, Tech Talk. Bookmark the permalink.