What’s the common thread: Riding motorcycles on the Isle of Mann at 200 mph; climbing an Adirondack Mountain in a snowstorm; facing drawn police revolvers during a traffic stop and hunting down the best Earl Gray tea? Aside from what might be frustratingly dissimilar choices for an IQ test question, they’re all tales spun by HCP members. There are over 600 members in the club, all with stories to tell, and there’s no better place to hear them than at the Club’s annual weekend get-away. This October the Club traveled to Mystic Conn. with the Inn at Mystic, overlooking the Pequotsepos River and Mystic Harbor, serving as the base of operations.

Steve and Julie Montano deserve medals for leading the drive. It was a daunting task keeping seventeen cars together- not so much on the route’s beautiful rural roads but in congested areas with 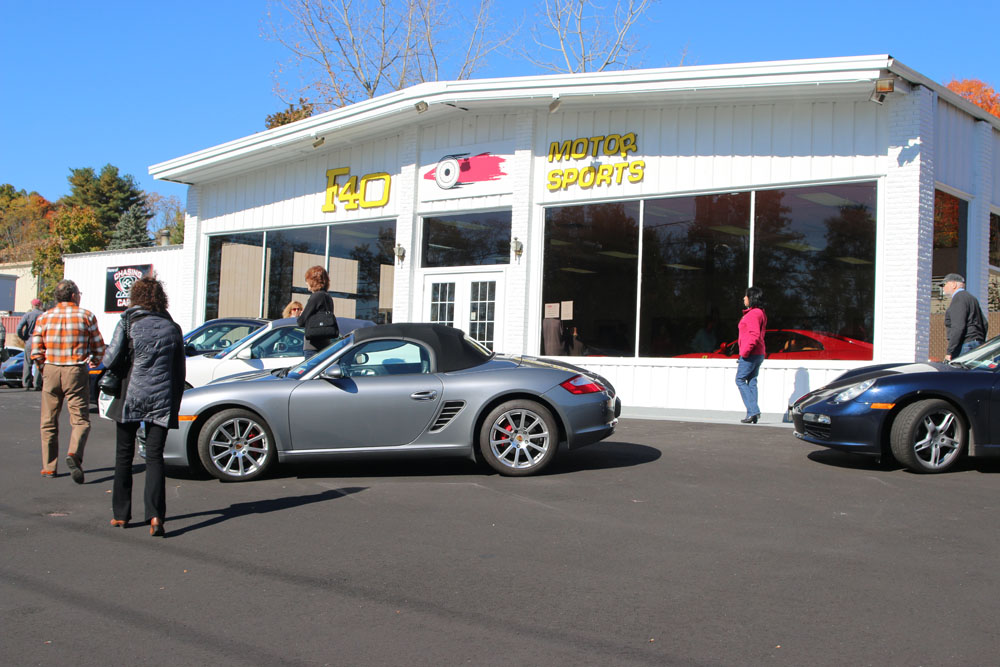 numerous stop lights and heavy traffic. The group split and regrouped, split and regrouped. Still, at day’s end, no one was left astray in the Connecticut countryside- all seventeen cars were safely parked at the Inn. A lunch stop and a visit to F-40 Motorsports in Portland, CT helped keep the group together. F-40, a classic and exotic car dealership and restorer is the child of Wayne Carini, the star of the Discovery Channel’s Chasing Cars.   Unfortunately, personal matters prevented Wayne from leading a tour of F-40; never-the-less, he graciously made an appearance at the restaurant where the Club ate lunch and spoke about F-40, Chasing Cars and his current restoration projects. It would have been a terrific tour with Wayne at the helm; still, it was impossible not to be awed by the cars housed in the F-40 garages and showroom: Ferraris of different stripes, a mint MGA, a ’38 Jag, a Chevelle SS, a vintage Rolls, and Paul Newman’s Volvo [his wife made him buy it]- mentioning just a few.

Lauren Bacall and Humphrey Bogart once socialized in the rooms of the Haley mansion where the weekend kicked off on Friday evening with cocktails, dinner, and lively conversation [see opening sentence]. Built in 1904 by Catherine Haley, the orphaned daughter of a sea captain [the captain died after being hit by a train while crossing the railroad bridge that sits at the foot of the inn], the mansion is a stunning example of Colonial revival architecture. The Haley’s were a well established Mystic family with considerable resources; Catherine’s husband- and cousin, who died three years before she began construction of the mansion, amassed a fortune from his connection with the Fulton Fish Market in New York City.   Catherine’s wealth evaporated when the market tanked in 1929- forcing the 1940 sale of the mansion to W. Frederick Mosel, an ad executive from New Jersey, for a mere $15,000. Mosel used the mansion less and less over the years, eventually selling it to the daughters of a neighbor who opened it to the public as the Inn at Mystic in 1981. The mansion hosts frequent formal events; Friday night club members dined on Filet Mignon, Swordfish and Roasted Chicken in a softly lit banquet tent attached to the house. 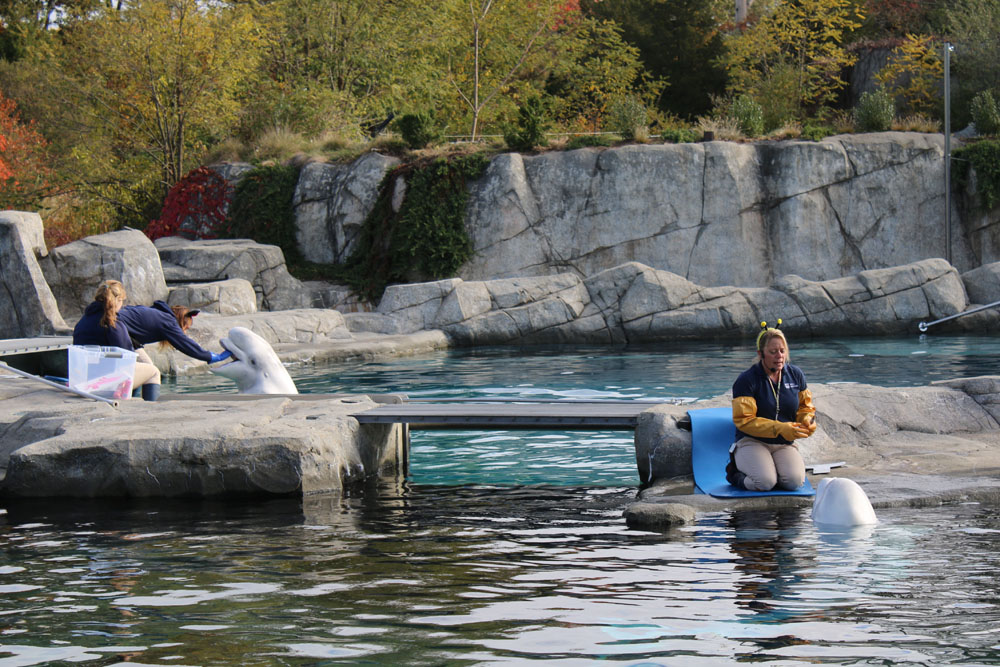 Saturday dawned cloudy and cool but the weather didn’t deter club members from visiting the Mystic Aquarium and it certainly didn’t faze the Beluga whales, the aquarium’s star performers.  The totally engaging creatures swim gracefully in the aquarium’s whale “pool” which covers an acre and holds three quarters of a million gallons of artificial sea water. Catch the whales at feeding time and catch a whale waving to you with its fin- a trick that helps trainers assess the whale’s health. The reward for a job well done- a fish and a pat on the tongue. The aquarium’s stunning tanks, housing creatures from diverse biomes, are a testament to the work of the aquarium’s first director, Dr. Stephen Spotte, a leading authority on modern aquarium keeping. Outside the main gallery, paved paths curve past the Beluga pool, an African black-footed penguin enclosure, a New England pond and one of only three Steller sea lion habitats in the United States. The day wasn’t all about looking. Crabs in simulated tidal pools dared to be picked up and Manta Rays circled in an oval tank like dirt-track race cars, allowing themselves to be stroked on the back. Rays are very smooth [some might say slimy] and very cool.

Saturday afternoon’s port of call was Mystic Seaport, an authentic recreation of an 1870’s seafaring village. Club members were among the 400,000 who visit each year to stroll village streets lined with over sixty 19th century structures that were moved to the site from locations across New England. Historians, story tellers and craftspeople play the role of village inhabitants. It’s a working village. The bank no longer dispenses notes and the grocer no longer sells hearing aids that look like misshapen oil cans; but, the cooper still makes barrels, the smith hammers out ironwork and the printer still sets type for broadsides. What they create is used within the village. 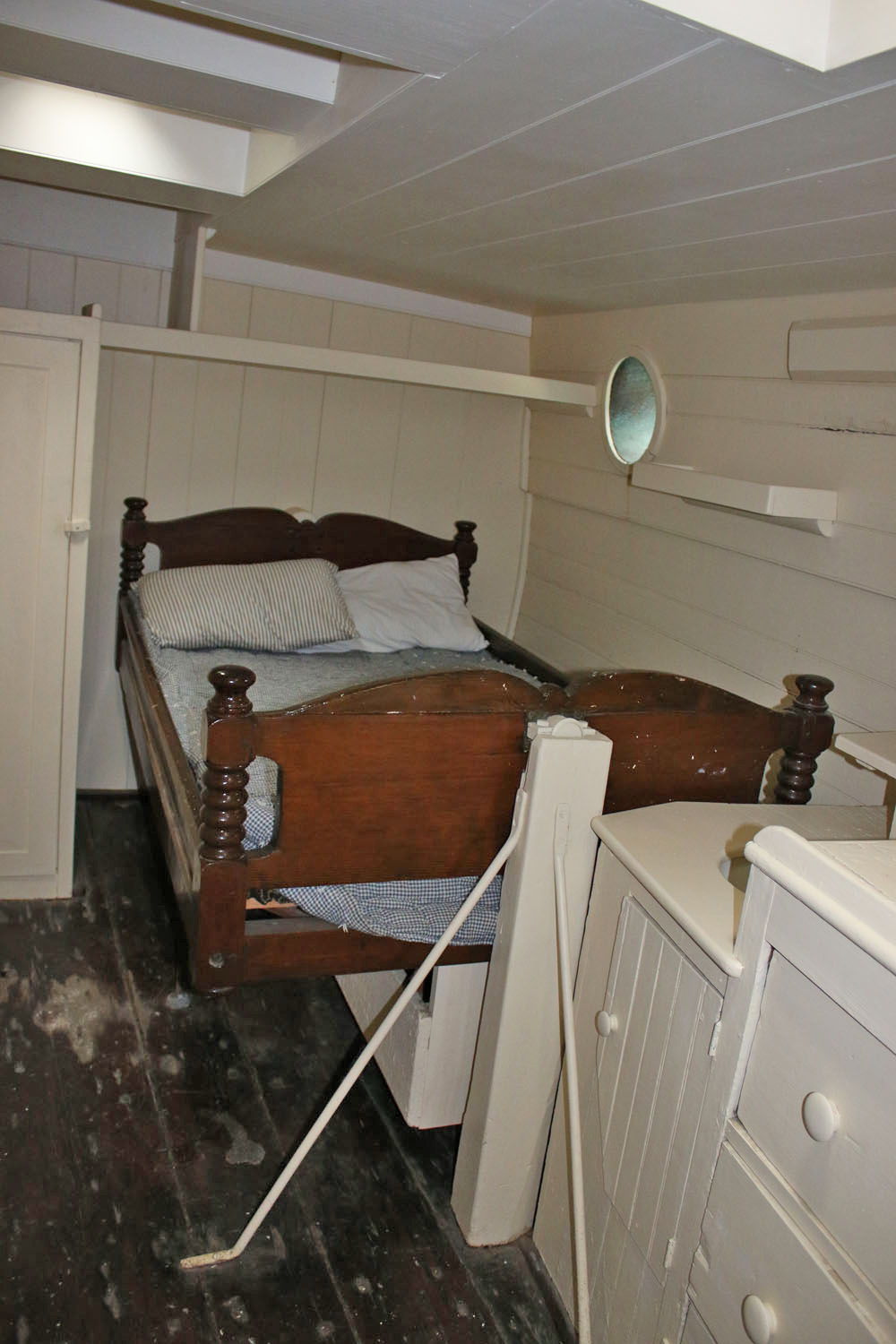 The Captain’s Bunk on the Morgan

The jewel of Mystic is the Charles W. Morgan, the lone survivor of the 2,700 whaling ships that plied the seas hunting creatures that yielded the oils essential to 19th society. Rigged as a double topsail bark with over 7,000 feet of canvas, the Morgan was home for thirty-five tars on voyages lasting as long as three years. The Morgan last set out in search of the leviathan in 1927; it arrived at Mystic in 1941 where it sat docked, an artifact of a bye-gone era. Yet, such a ship deserves to be at sea and in 2009 the museum’s board voted to undertake the repairs necessary to send the ship on another voyage. Sails fully unfurled, the again sea-worthy Morgan set out its 38th voyage, a celebratory eight week visit to ports along the New England coast. 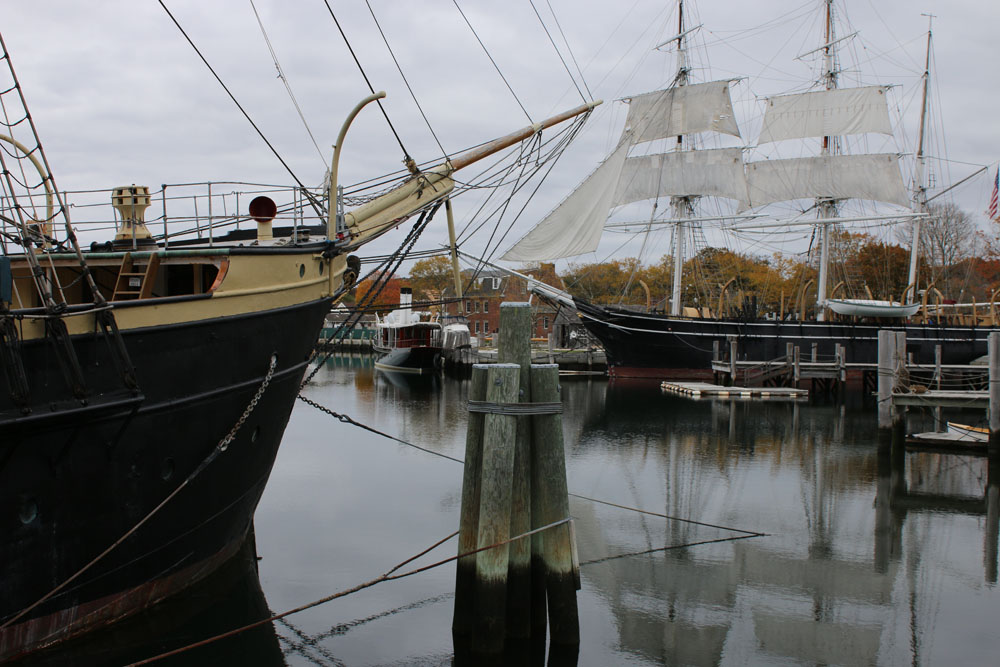 The Charles W. Morgan in the background

The Charles W. Morgan is a majestic ship that conjures romantic visions of men who sought wealth on the unforgiving oceans of the world. Yet with the singing of the Beluga whales at Mystic Aquarium in your ears, thoughts turn bittersweet when gazing at the brick oven on the ship’s top deck that was used to melt whale blubber into oil. Whales are sentient and social beings. Upper estimates of the number of sperm whales alone killed during the nineteenth century approach a quarter of a million.

Sunday morning. Some folks headed home. Those who remained made the short drive to the Submarine Force Museum and U.S.S. Nautilus in Groton. The museum is a fascinating mix of artifacts, models, submarine hardware and informational displays that tell the history of submarines. The Nautilus, the world’s first nuclear submarine sits moored in the Thames River, behind the museum. Now a national historic landmark, the Nautilus was commissioned in January, 1954 and made its first voyage a year later. The sub truly entered history when it became the first ship to cross the North Pole. Dubbed “Operation Sunshine”, the voyage took the sub under the polar icecap and another 1590 miles into the sea off the coast of Greenland. Visitors contemplating a tour of the ship encounter a sign suggesting those with claustrophobia might reconsider stepping on board. To be sure, quarters are tight. With refrigeration non-existent, sailors on the Charles W. Morgan subsisted on hard tack and dried meat. A far cry from the vittles on the Nautilus. It’s said sub crews enjoy the best food in the Navy. Fair compensation for the Nautilus’ crew that, at times, sailed deep beneath the surface in cramped quarters for ninety-six hours at a stretch.

Leaving the museum, heading home and reflecting on a weekend packed with activity, it might be simplest to say it was three days of great activities- and a time for friendships celebrated and friendships made.

More photos from our trip: 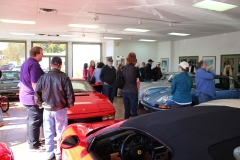 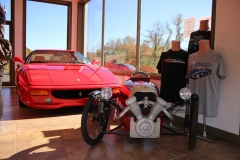 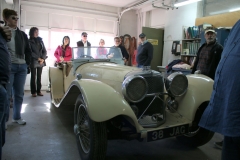 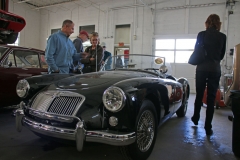 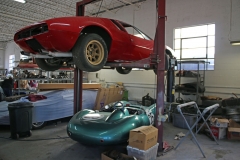 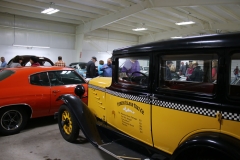 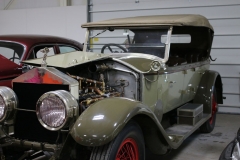 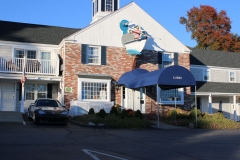 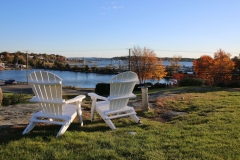 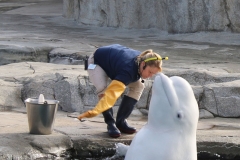 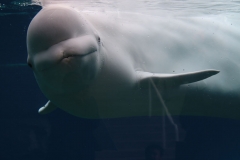 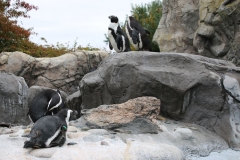 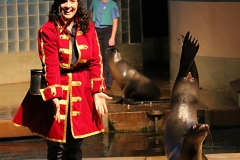 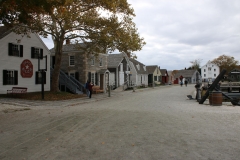 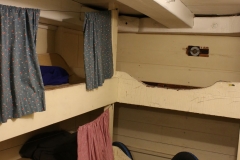 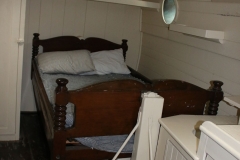 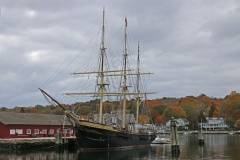 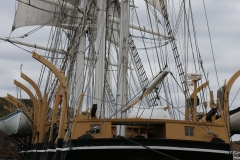 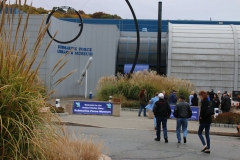 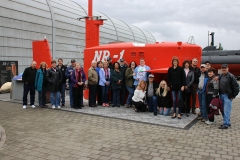 12►
This entry was posted in Activities and tagged featured. Bookmark the permalink.