On my wall in my office is a list of cars. There are 36 cars so far and 10 motorcycles. That list includes a few VW’s, some British sports cars, a couple of Isuzu Troopers, several Hondas, and at least one vintage Land Rover.

You see, I bought cars cheap, ran them for a little while and sold them again. There are some I miss, such as the Vanagon Syncro or the Jeep Commando, or maybe even my old ’59 Coupe DeVille. But I had always told myself, that someday I’ll get a Porsche. To me it was my holy grail, a car that I will have when I’m ready.

To be honest, I don’t know what kept me from getting one earlier. The reality is, they’re not that expensive. Why buy a Subaru when you can have a used Porsche?

When I started looking, I started with research. The 911 is iconic and I love the lines on the older models, before they started flaring the fenders and going all disco. I know the stories of how they handle. One wrong move in a fast corner and the back end would be chasing trees in the woods, evidently hunting for rabbits or some such thing. I used to drive a tail heavy car, if you count my old VW’s. I could drift my old Super Beetle through an exit ramp off the highway with the best of them. You could dial in the drift with the throttle. But then came the Boxster. The rebirth of the 550 Spyder in my eyes. Mid engine, convertible, and according to the reviews, damn nimble and perhaps even better than a 911.

The Boxster was balanced. Not tail heavy. 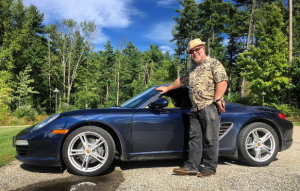 More research! There’s a scare about the intermediate shaft bearing, and that has dropped the prices on pre 2009 models. The 2009 however has a different engine design, the 9A1, and also incorporated a lot of the changes that previous owners were looking for.

So the hunt was on!

A 2009 Boxster. I found mine in New Hampshire at some random used car dealership thanks to Cars.com. I drove my TDI Beetle north of Boston, traded it in and drove the Porsche home. Dark blue metallic with the navy blue soft top. It’s not the S model, but that doesn’t matter presently, (ask me again in a couple years.) It gets out of its way quite nicely and can point and shoot in traffic. When I drive out to Buffalo or down to Charlotte, it’s perfectly comfortable and I enjoy every second of it. Top down or up? If it’s above 13 degrees Celsius, (I went metric 5 years ago) then the top is down, till the rain gets too intense.

So the biggest question I have, is, “Why did I wait so long?”

I’m Monk Schane-Lydon, the new Webmaster/Communications Chair, so this will give you some insight to my Porsche experience. One car so far! Until I find that 912 of my dreams. monk@monksvoice.com Send me any stories and pictures for the blog!