Porsche of Clifton Park was the venue for July’s monthly meeting- a chance for members to socialize, dine on fried chicken, catch up on Club news and get a look at Porsche’s new 718 Boxster.  The customary reports from the Club’s board painted a picture of a Club that remains in good financial health, continues to add new members and offer much to do.

With the addition of six new members, total membership now stands at 620.   Everyone should find something of interest in the broad range of activities scheduled for July and August. July 23rd offers Porsche Platz at Lime Rock. The event includes track side viewing of the 2016 IMSA WeatherTech Sports Car Championship from a West Bend vantage point as well as live, exclusive, large screen TV coverage of the race. Much, much more awaits visitors including a chance for the first twenty-five cars that arrive for the day to drive the track on an exclusive Porsche parade lap. At month’s end,  activities chair Louis Dahoda will lead Club members on a tour of four Saratoga horse farms, each with a different theme.  In August, Polo beckons.  You’ll find details for these events on the blog.

August offers three driving events:  DE for novices at Lime Rock, the Zone 1 autocross competition in Devens, MA and a Club event at the McCarty lot.  If you’ve wondered what it’s like to drive your Porsche on a race track, the Lime Rock event is for you.  Instructors are ready.  Drivers are needed. It’s expensive for the club to stage a DE event. The greater the number of drivers, the greater the chance the Club will be able to continue offering track instruction to novices.  Check with track chair Chris de Graffenried [track@hcp-pca.com] for more information.  Our Club is also recruiting drivers for the Zone 1 event.  No experience is necessary.  If you’d like to be part of the autocross team that represents our region, contact autocross chair Matt Rutten [autocross@hcp-pca.com].  Team members get cool T-shirts.  HCP’s third autocross event of the season on August 28th brings the month to a close.

The exhaust snarl of a 2017 718 Boxster S sounded the key note during the evening’s tech talk that gave members a close-up look at the redesigned car.  Only the front and rear trunk lids have been carried over from the previous Boxster.  Everything else is new.  The back end, with new lights and repositioned Porsche logo, looks wider.  Strong horizontal lines and sharper front fender edges give the car an angular, athletic look.  At the heart of the redesign is the new 2.5 L, four cylinder, turbocharged Boxer engine.  The new four puts out 35 more horsepower and 43 more lb.-ft. of torque than the previous six cylinder S engine.  Porsche claims the car will hit 60 mph in 4.4 seconds,  .4 seconds faster than the 981 S. Top speed is said to be 177 mph.  Another change: the Boxster is no longer the least expensive car in the Porsche line-up.  The Cayman now occupies that position.

Thanks to Christian and the crew at Porsche of Clifton Park  for hosting the meeting, diner, trivia prizes and a look at a beautiful new Porsche. 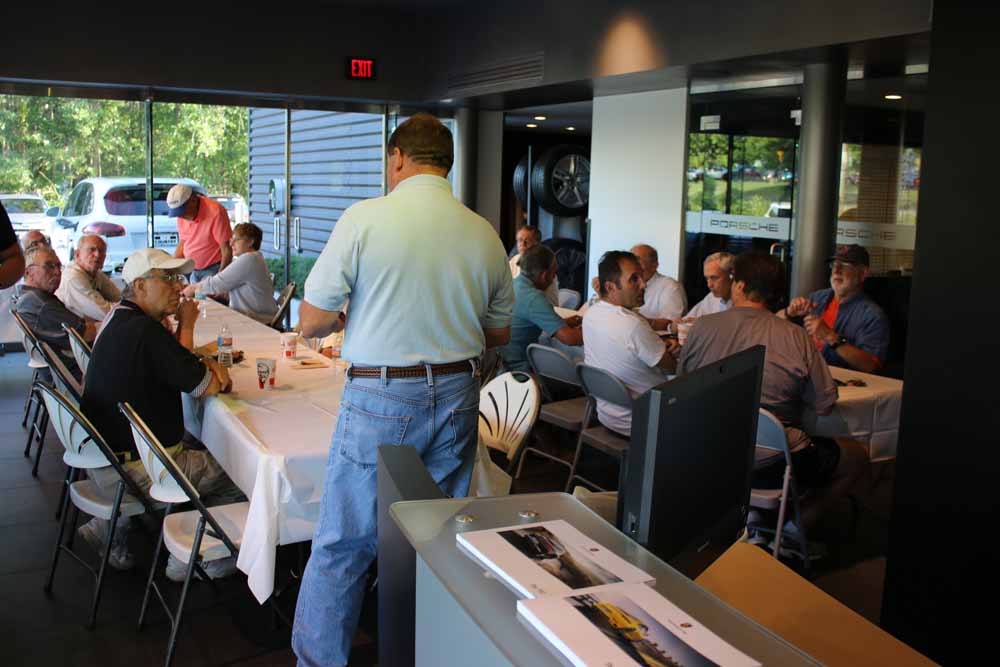 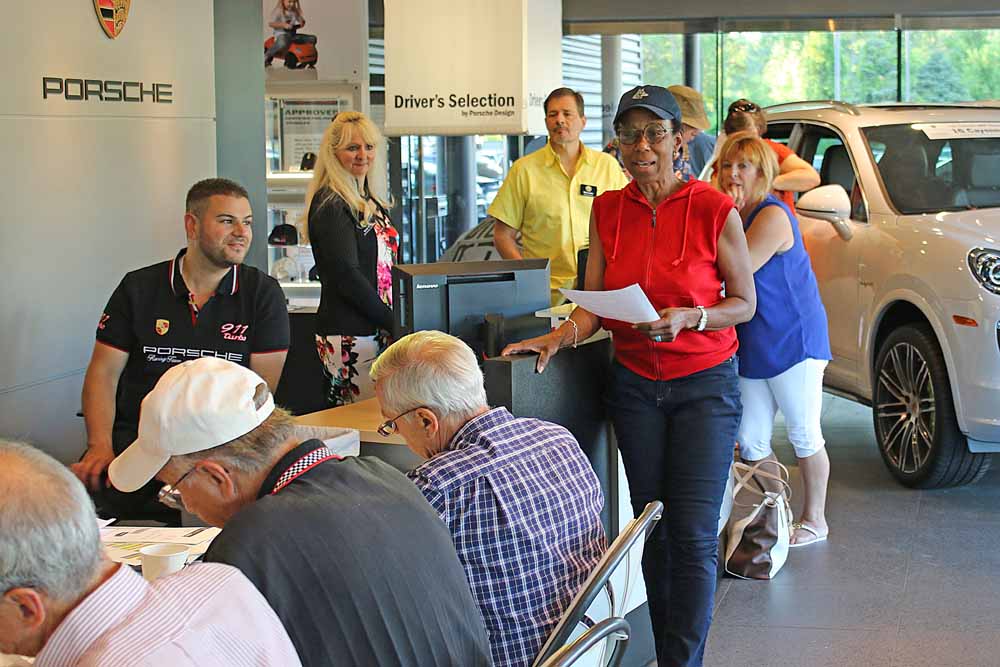 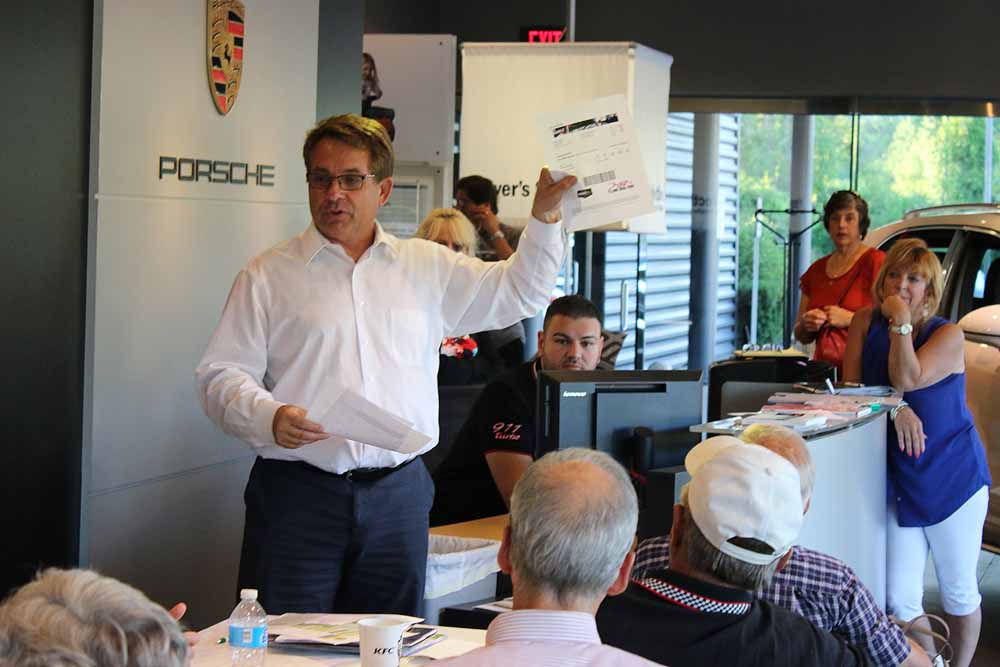 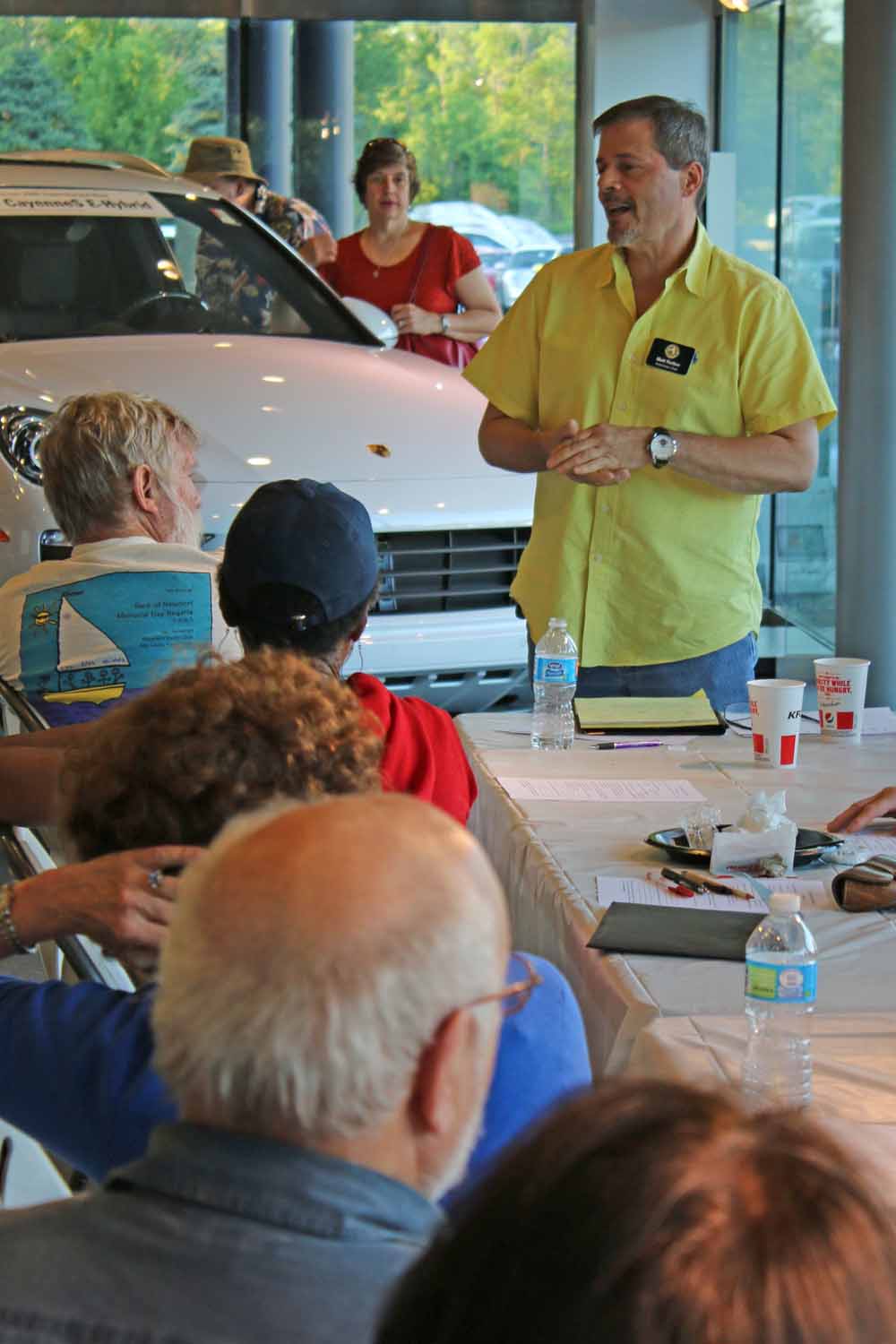 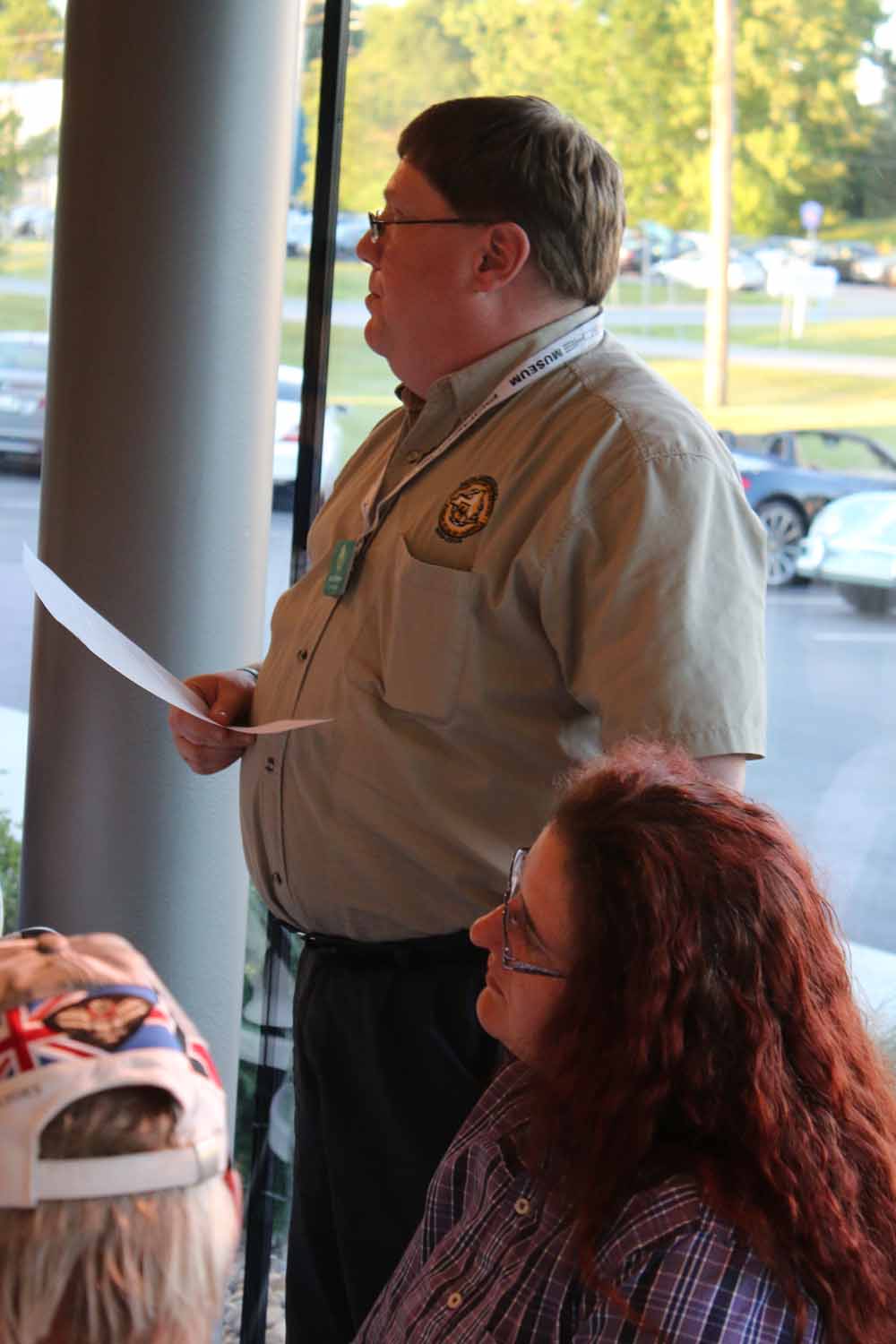 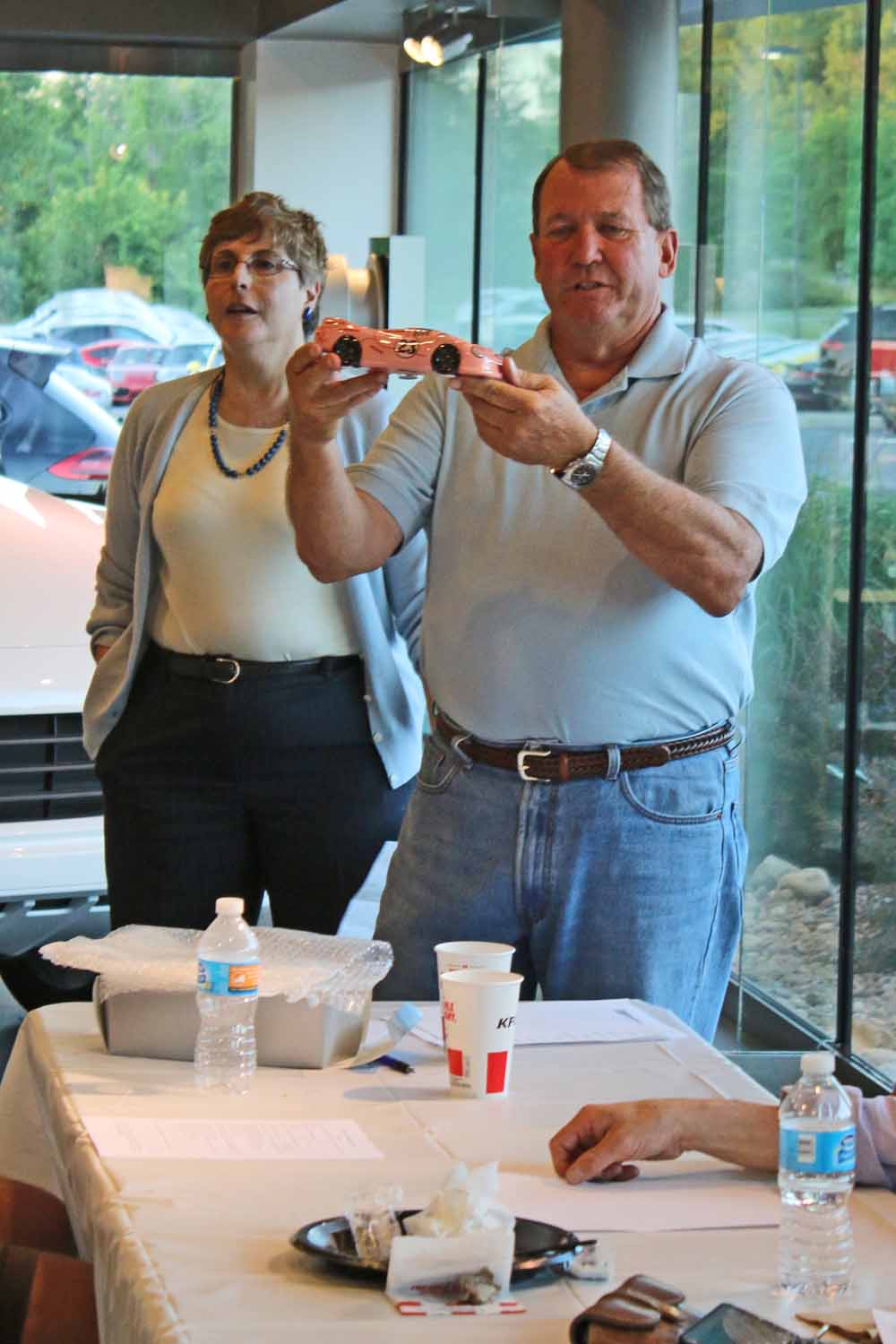 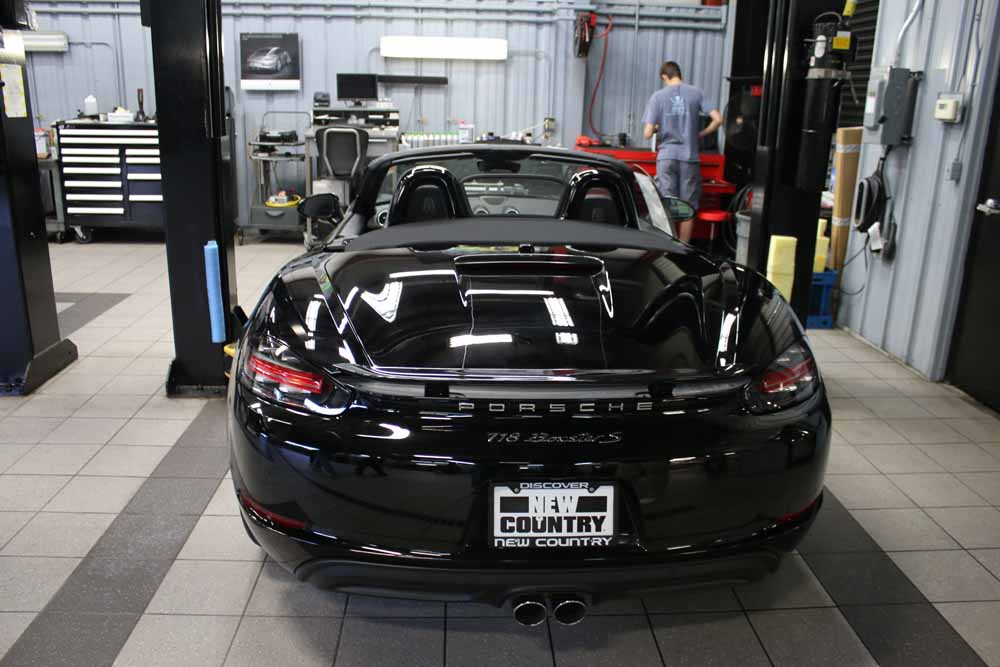 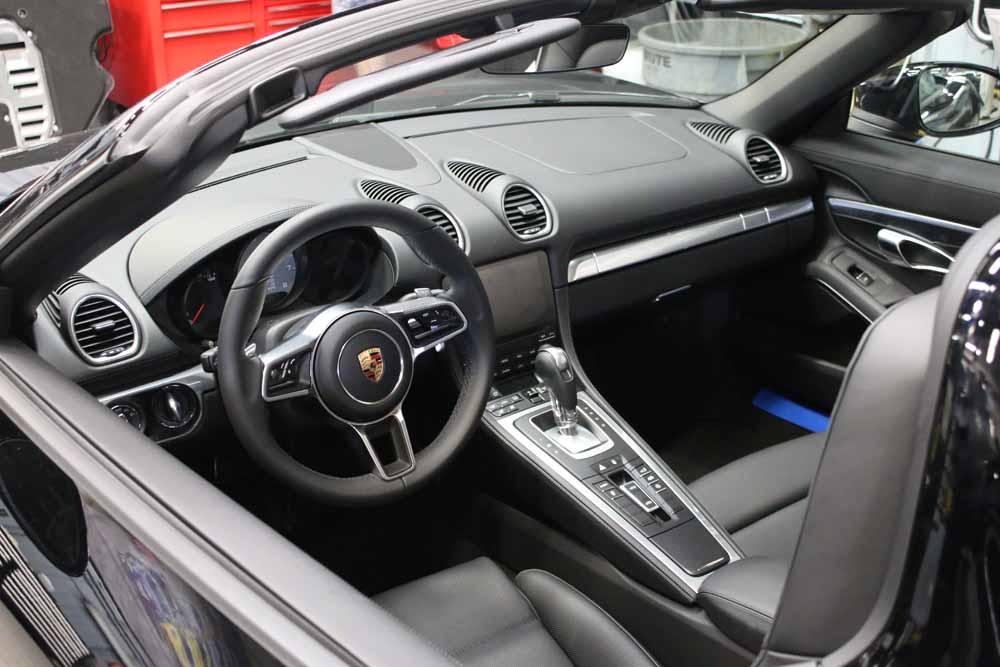 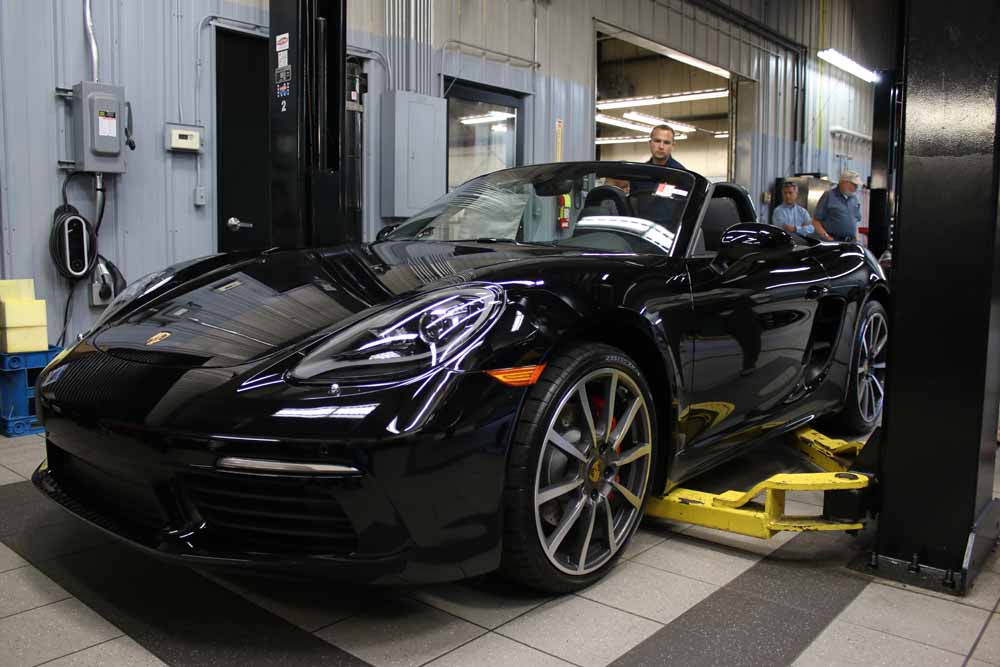 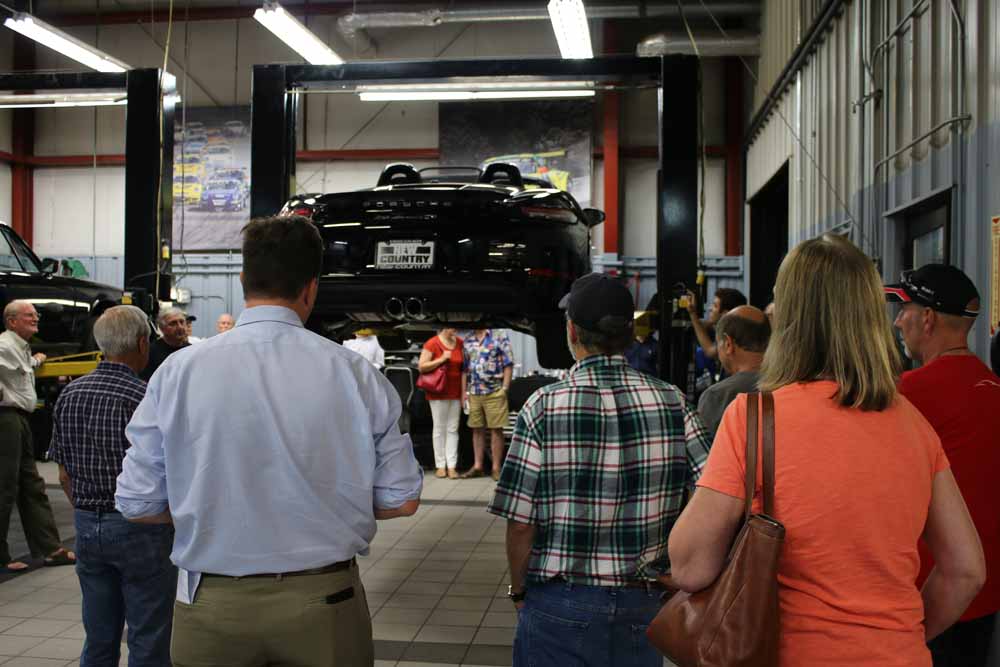 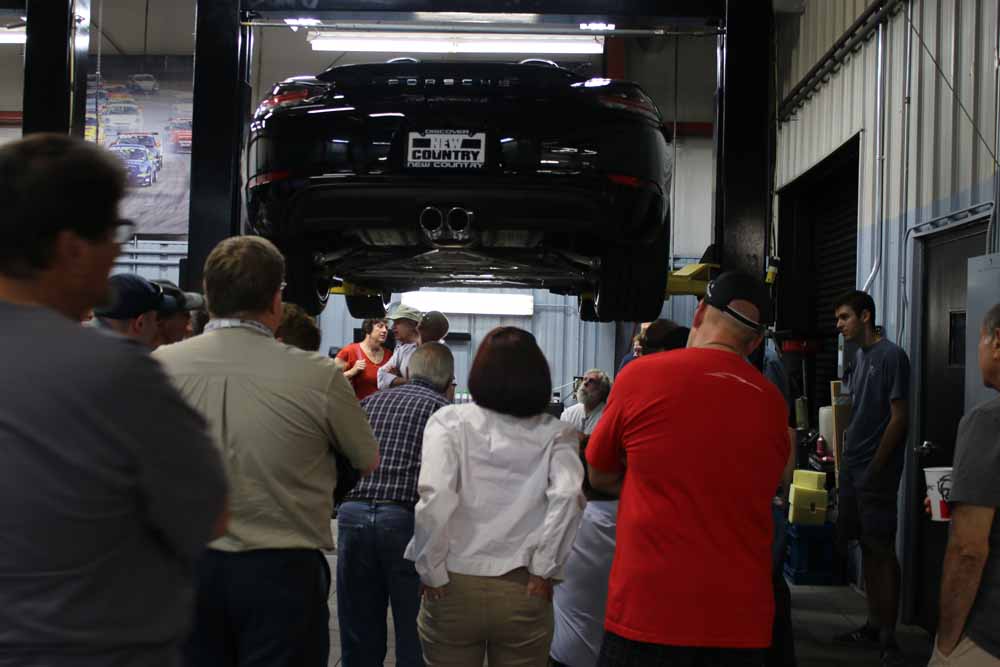 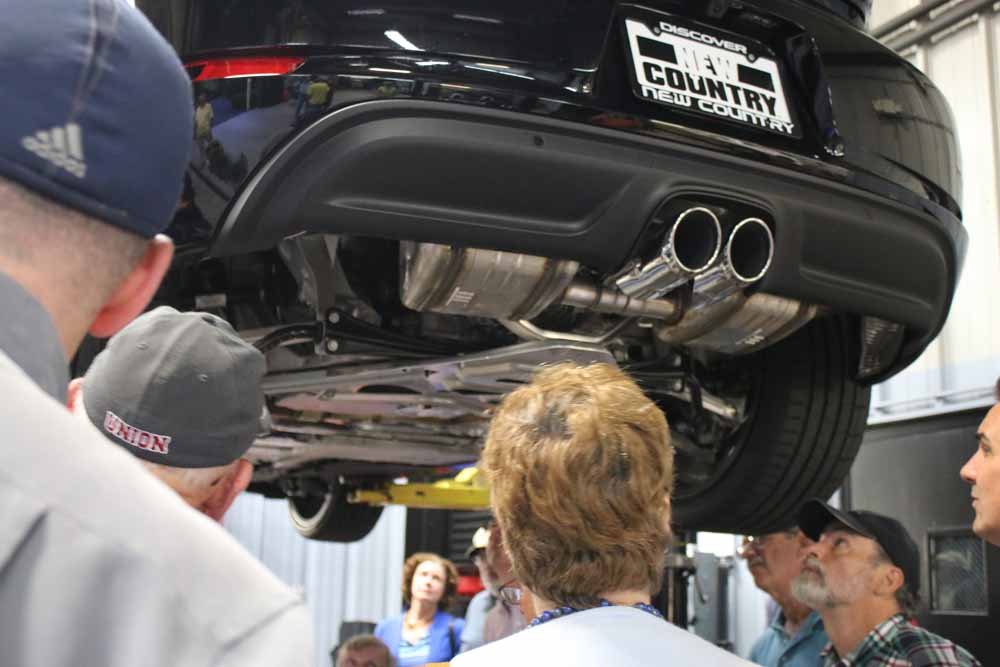 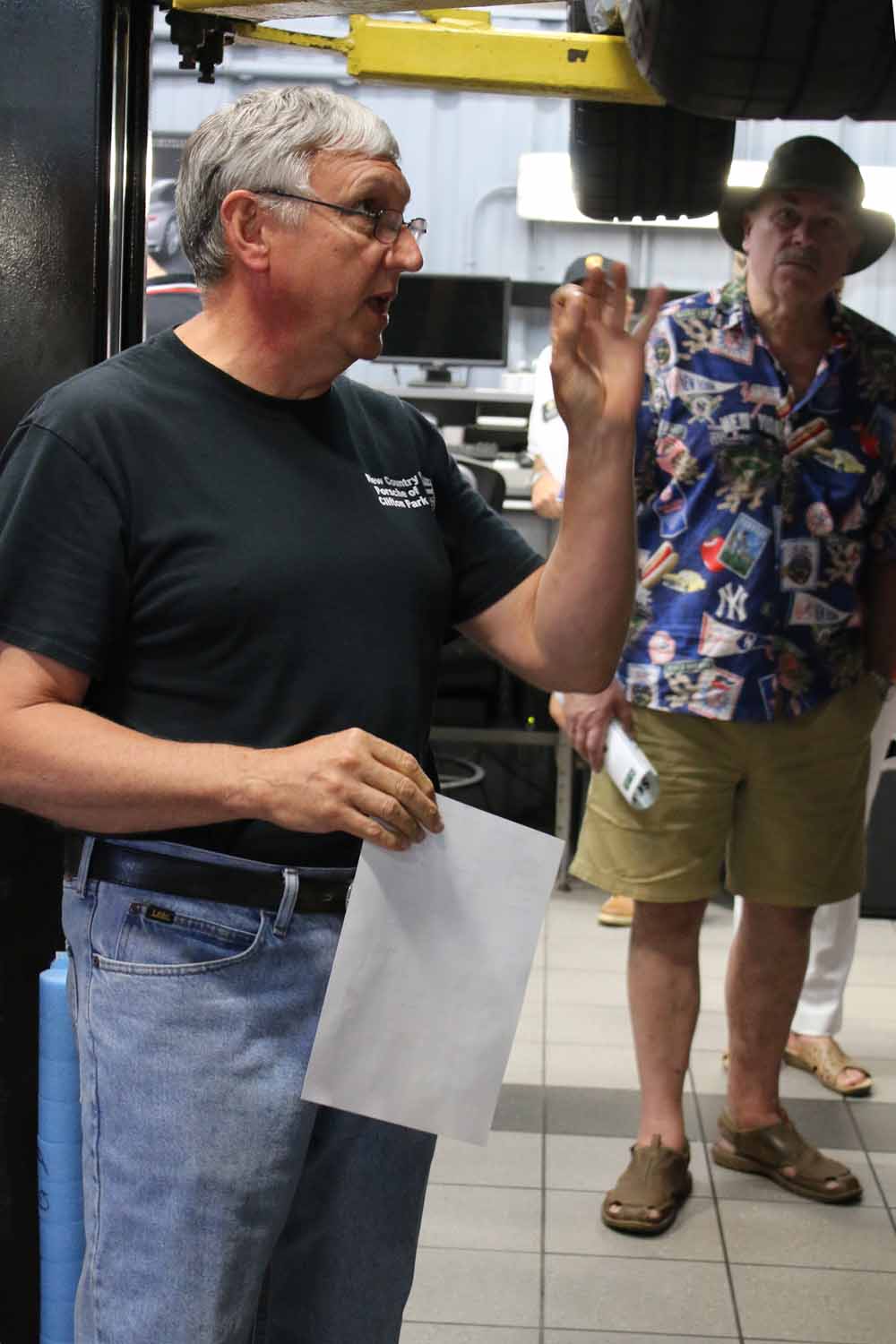 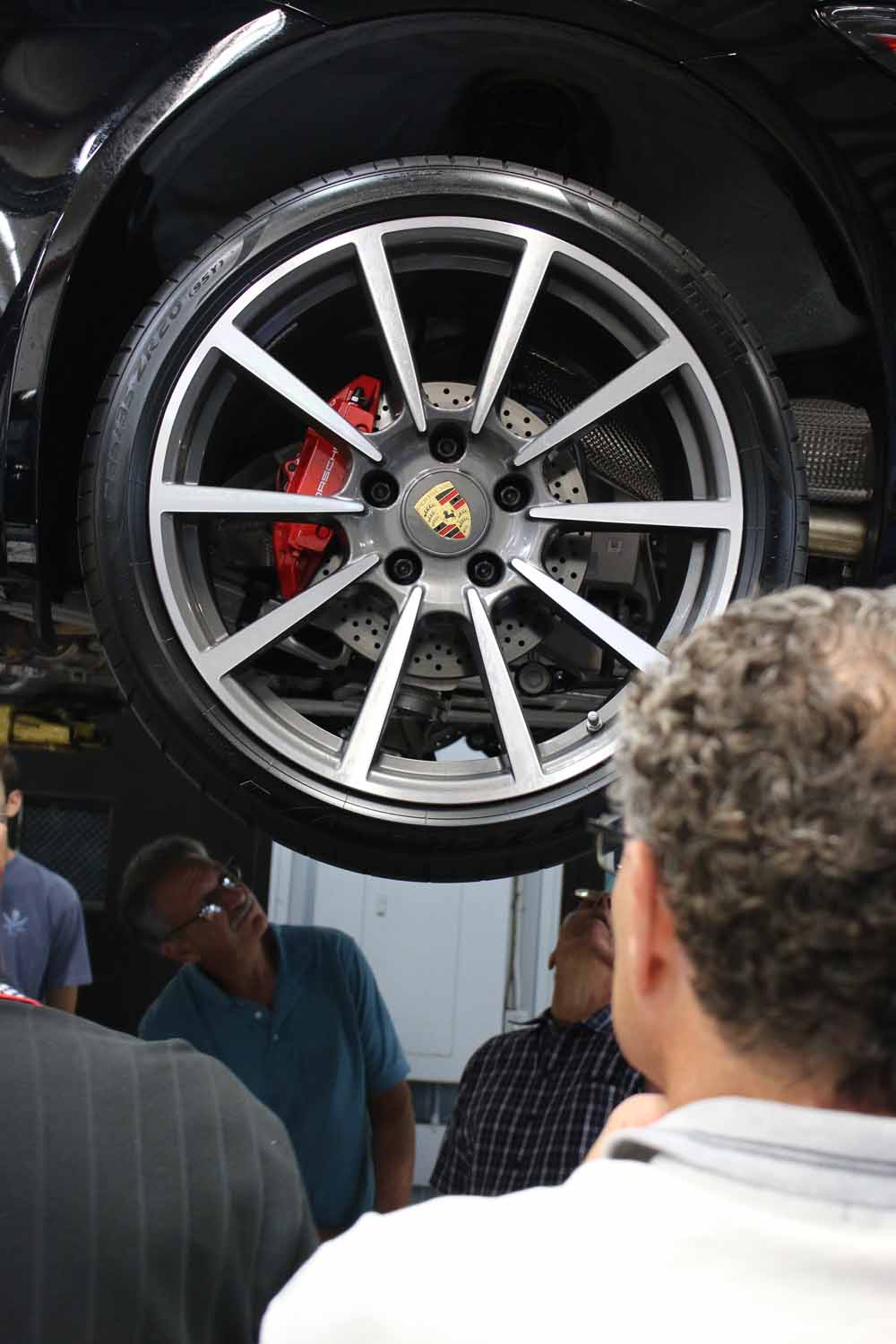