It Started Over Cars and Coffee…

Although it was a chilly start to the day on Saturday morning, the sun broke through the clouds as Rick and I made the drive in our Boxster from Malden Bridge to New Country Porsche in Clifton Park. It would be our first time attending the Cars and Coffee event. 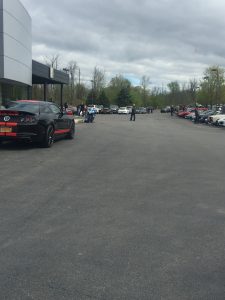 When we pulled into the parking lot, we were immediately struck by the number of people milling around. If you’ve ever been to one, you know what I mean, and if you haven’t, you really need to check it out.

As we wandered to the dealership, we exchanged greetings with those admiring the impressive cars parked both inside and out. But it was the car parked in front of the dealership that seemed to be getting the most attention. When I asked what all the fuss was about, I learned that the car was valued at over a million dollars. Now that’s a car worth checking out!

Inside, the air smelled of coffee and event goers were partaking of bagels and muffins provided by the dealership. There were lots of smiles and car talk as we caught up with those club members we haven’t seen in a while.

At 10:00 am, Lou Dahoda rounded up those of us who would travel to The Equinox Resort in Manchester, VT where we would have lunch at the Marsh Tavern. With the inside scoop that there was a 100-mile bike race taking place along our route, Todd and Caren Braiman took the lead position.

Six Porsches and an Audi carrying a car seat occupied by a future Porsche club member followed! We pulled out of the dealership to begin our drive through the winding roads and the beautiful country lying between Clifton Park and Manchester.

Is This the Place?

The ride was gorgeous as the sun peaked in and out of the cloud cover. Flowering trees were in full bloom, and the colorful outfits of the 100-mile bikers pedaling alongside our Porsche parade only added to the springtime mood. Before we knew it, we were pulling into the impressive Equinox Resort complex. 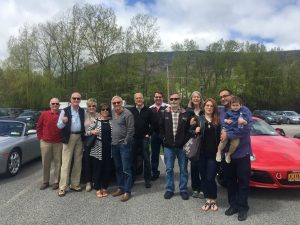 Finding our way to the Marsh Tavern took a minute or two, but when we found the place, we were greeted with wide smiles and warm welcomes from the staff.

Long wooden tables and light filtering through the floor to ceiling windows added to the ambiance of cordiality and friendship. The menu was amazing and the waitstaff wonderful. We were even able to meet the chef who came to our table with a firm handshake and a smile that lit up the room.

We laughed, took pictures of our food to send to Ken Blass, and talked about what was available to do in town.

After lunch, some Porsche club members wandered around town while others joined the Land Rover Experience.

I hear it was an incredible time!

Once again, thank you to Lou Dahoda for handling the details. We appreciate you!