A few years ago, my Porsche® 996 Turbo’s hydraulic wing lift system failed… twice…  The first failure was before I bought the car.  I purchased my 2002 Turbo knowing that the wing did not go up and down as it should.  Being an engineer, I thought it must certainly be a rather simple repair.   Researching a few popular online 996 Turbo forums, there was quite a bit of advice on how to fix the problems with the hydraulic wing system.

Step 1 was removing the 3-piece hydraulic mechanism from my Turbo’s back lid and disassembled it on my work bench. 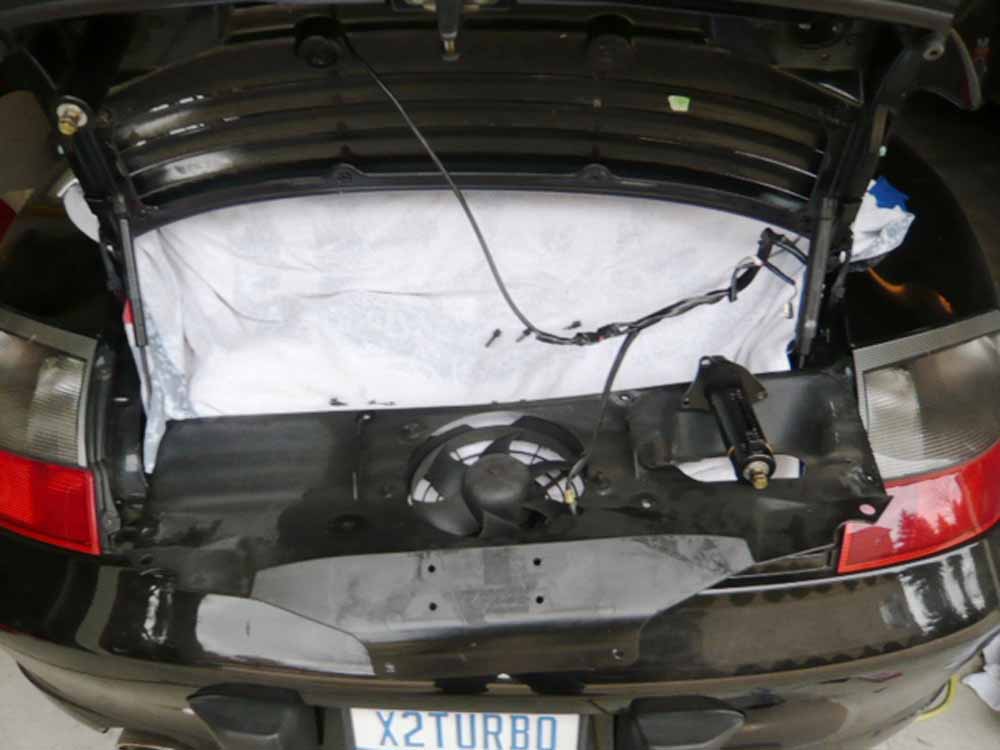 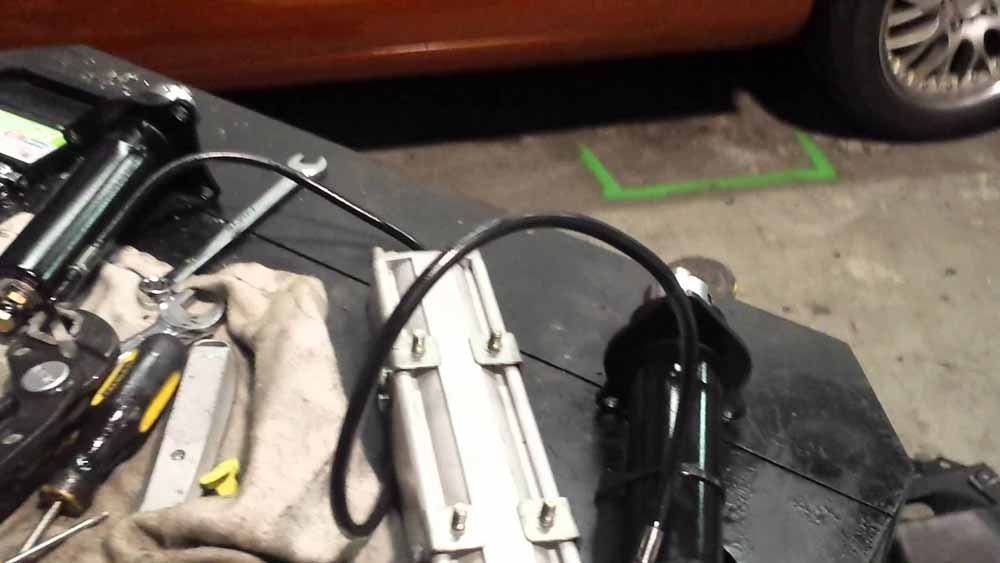 Removal of the 3-piece hydraulic system and subsequent troubleshooting took quite a bit of effort – and was a very messy job with power steering fluid leaks and drips.   But I was driven to find the root cause of failure and finally discovered plastic components that had partially melted inside the 12V motor along with the PS fluid leaks.  It was clear that the system was never intended to be refilled, much less regularly maintained.  Once the motor was repaired and the hydraulics refilled, bled, tightened up and bench tested, the mechanism was installed back into my Turbo.  Problem solved…I was proud of my repairs.

Just a few months after the rebuild, one of the hydraulic rams catastrophically failed, leaking PS fluid down the back bumper and into the engine bay.  The wing was stuck up on one side and wouldn’t move. 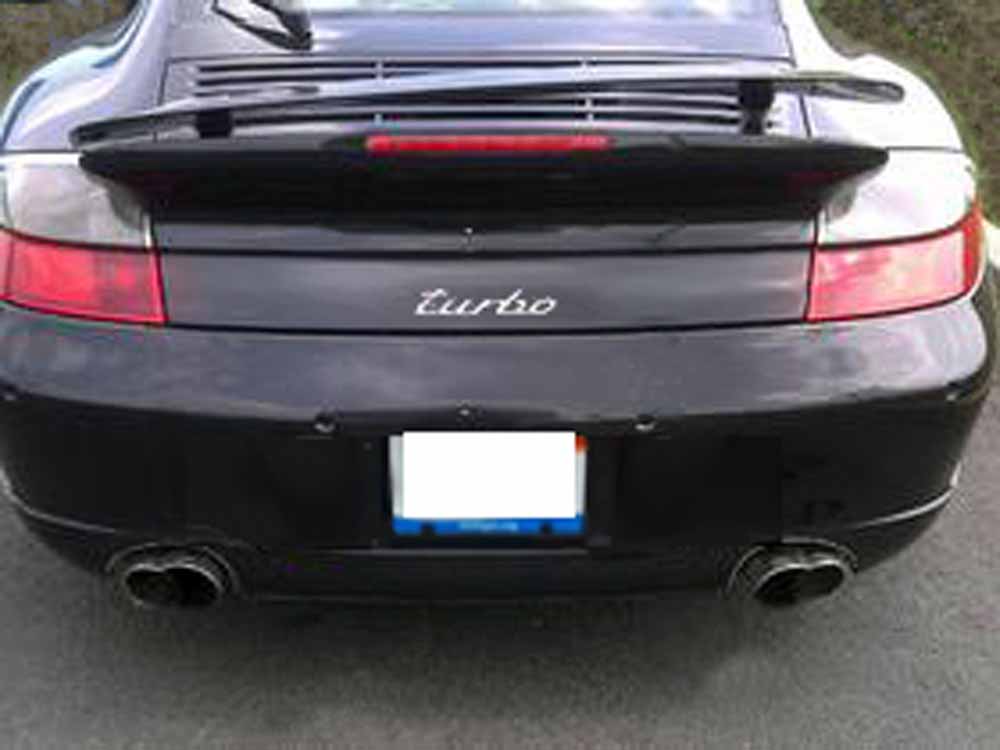 Further research verified that the hydraulic ram cylinders cannot be rebuilt without cutting them apart to replace leaking internal seals – then resoldering the assembly back together.  From stories on the forums, it became apparent that there are a quite a few failure modes:

Why would such a failure prone mechanism ever be installed on the 996 Turbo?  Further research revealed that Porsche® designed and patented a “Motor vehicle with a rear end spoiler device”, or the bi-wing design, that for the first time provided negative lift (or downforce) on the Turbo.  Porsche needed a dual cylinder lifting mechanism for such a wing and went outside to find the mechanism.  A hydraulic mechanism was designed, patented and supplied by a German supplier to Porsche in time for the 5th generation water cooled turbo production start in 2000.  This same hydraulic mechanism was used for the Carrera GT wing and again for the 6th generation 997 Turbo wing.  It was clear to me that there had to be a better device for raising and lowering the wing.

My engineering instincts kicked in, causing me to wonder how to improve the overly complex, and failure prone hydraulic wing lift mechanism. 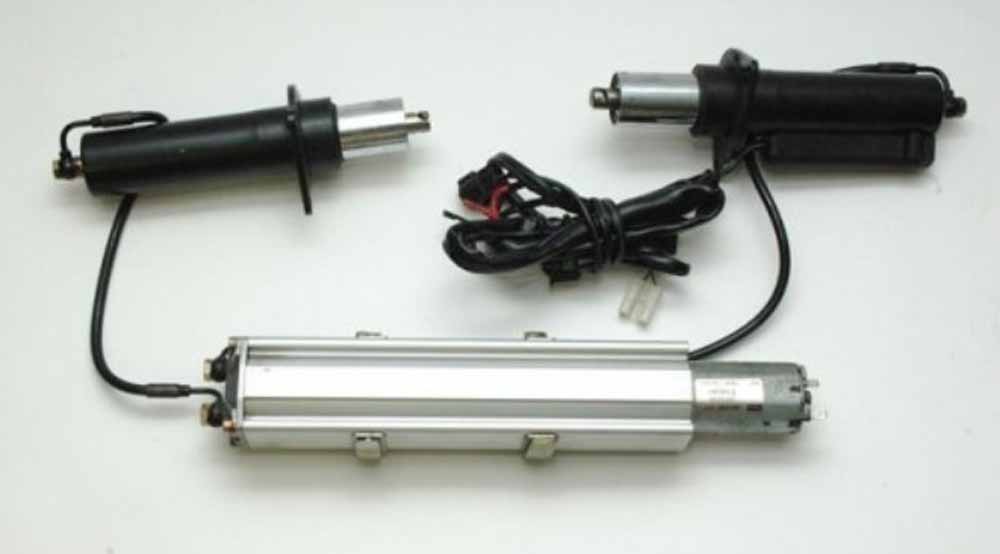 My goal was to design and build a simple all-electronic wing lift mechanism for my car that is robust, yet easy to install and work on without special tools.  I searched for a 12 volt electric ram and found devices that are used to position photovoltaic panels in the desert.  Perfect for placement under the Turbo’s lid!  I then designed CAD prototype parts and had them machined for trial fitting.  A local water-jetter and machinist were secured to produce the various prototype parts out of billet aluminum: 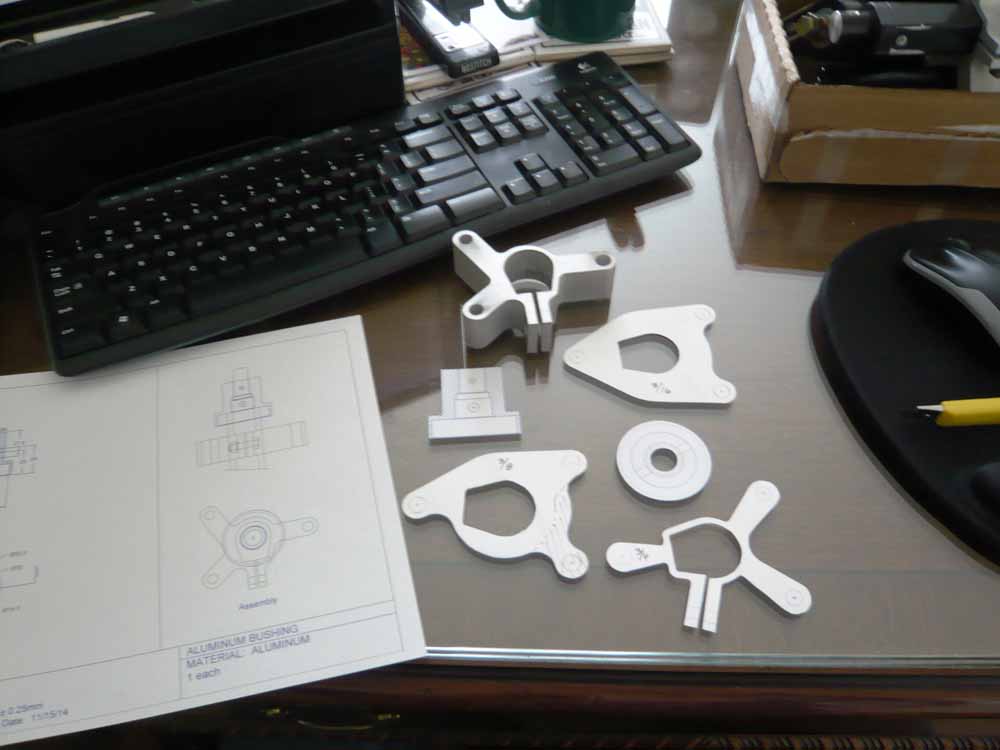 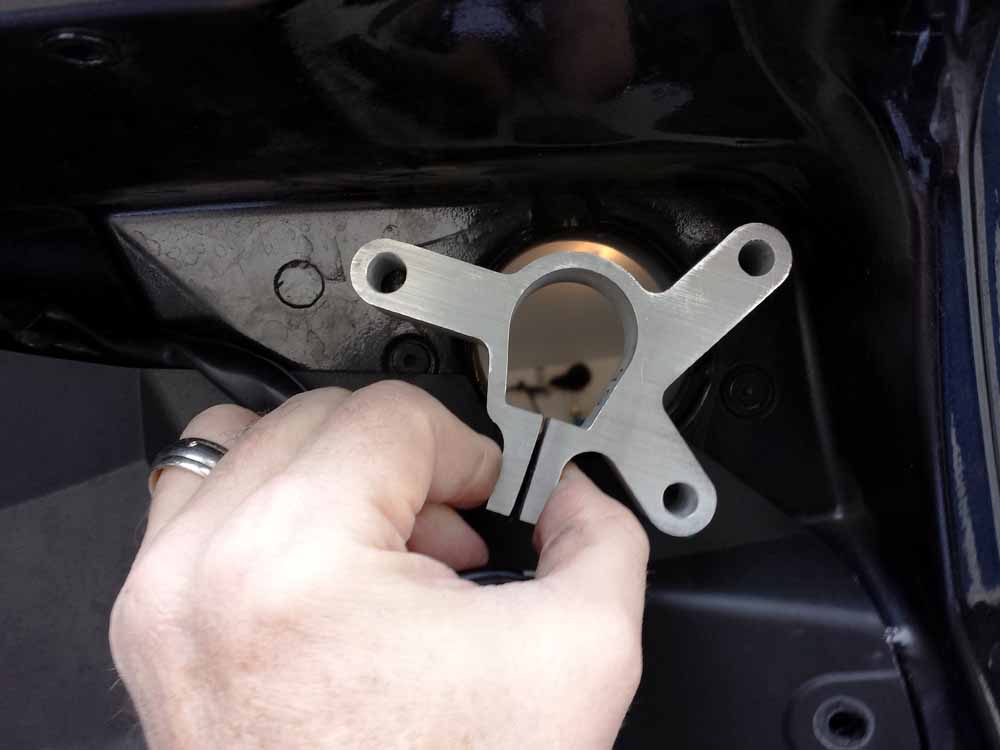 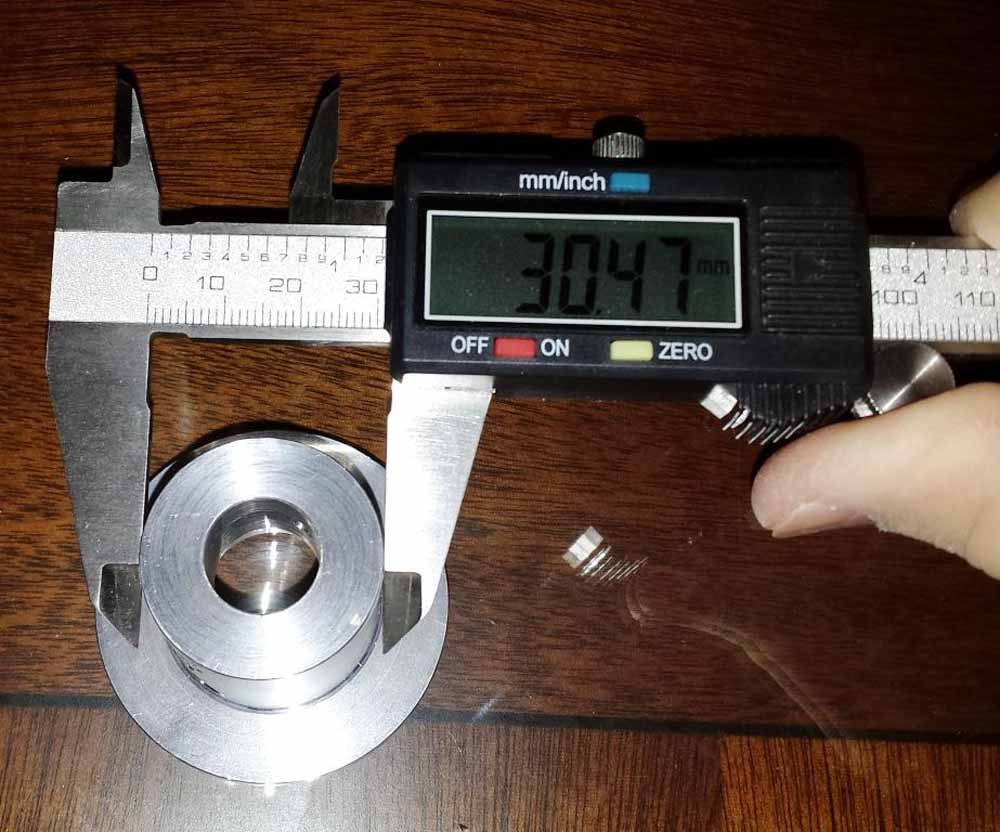 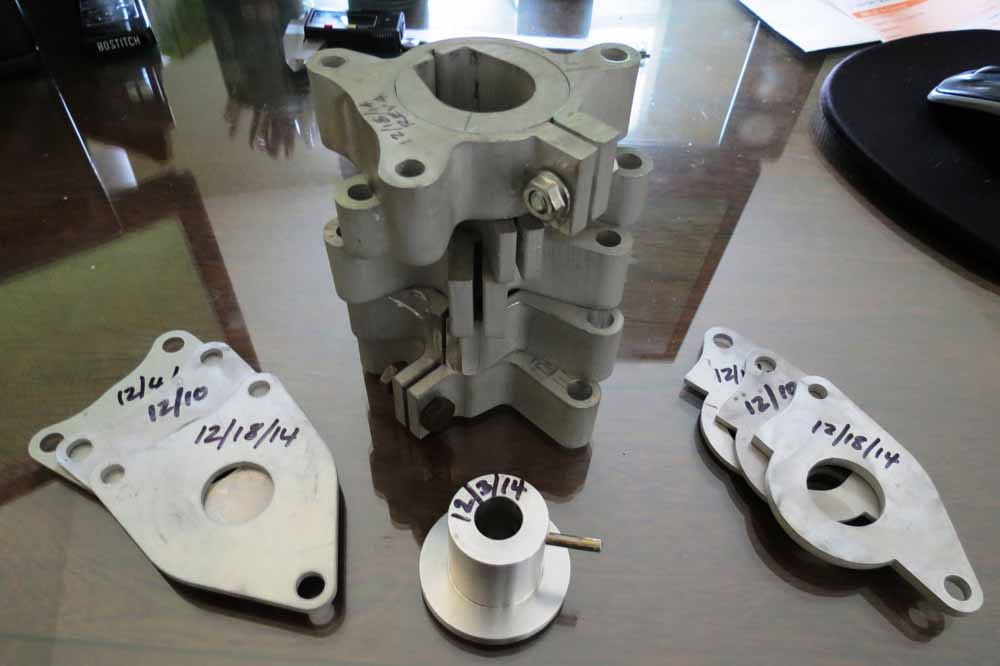 The next challenge was figuring out the electronics, which was the most time consuming piece of the puzzle.  In the stock Turbo, should the wing not move, or extend up all the way, or take too long to deploy, the dreaded Spoiler Warning is displayed on the instrument cluster. 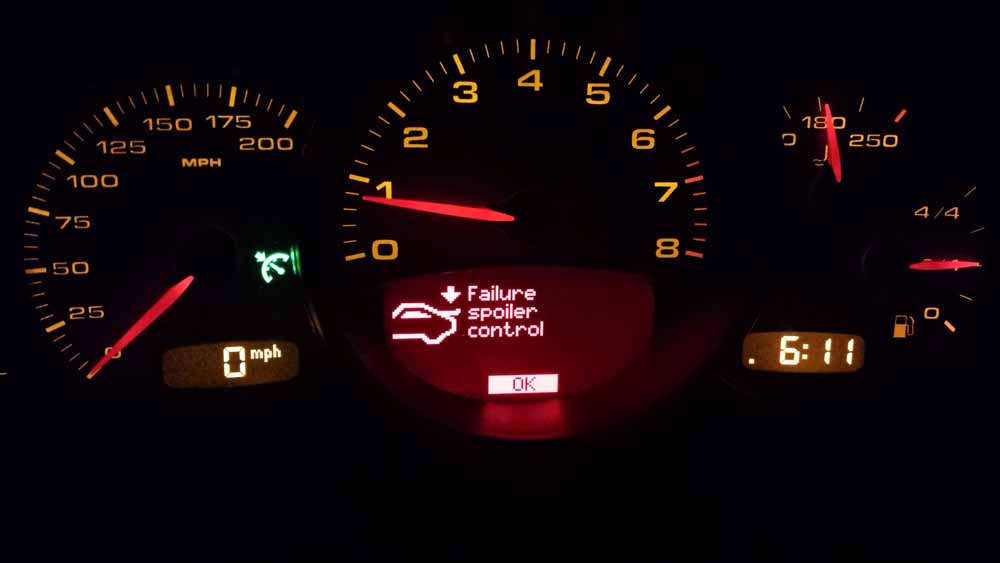 It was necessary to understand the switch logic and reverse engineer what the original programmers had coded into the cluster ECU in order to circumvent the warning.  After completing the ladder logic, I made a prototype electrical gizmo with relays and programmable timers mounted to a plywood board for in-car testing.  It functioned perfectly to circumvent the warning. 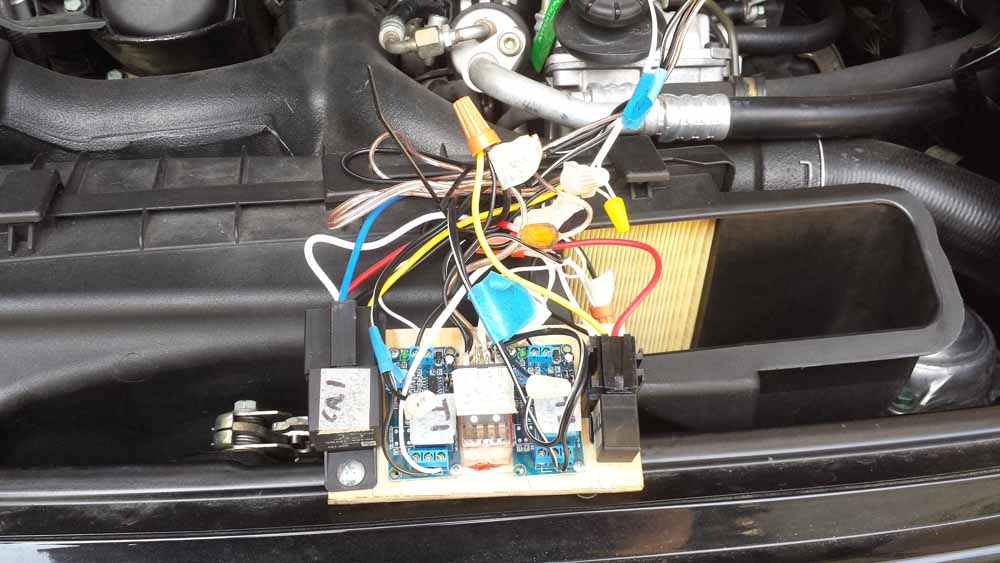 The final challenge was figuring out how to fit all of the electronic components into a small waterproof box – with that piece done, it was mission accomplished:  Lighter, More Robust, 3 Heights, Virtually Plug & Play and NO MORE HYDRAULICS!

After all this work, I wondered if an electric wing lift mechanism might be desired by other 996 Turbo owners?  As it turns out, the 4th most popular post on a well-attended 996 Turbo forum, at 55,911 views, is “996 TT rear spoiler problems – Help!”  The original idea was to improve upon the factory hydraulic system in my car, but maybe others would benefit from a solution to replace their dysfunctional spoiler mechanisms.

To find out, I created a post on the same 996 Turbo forum titled “Beta Testers Needed for Electric Spoiler Rams”.  In short order, 24 fellow 996 turbo enthusiasts stepped up to test out my new wing lift kit and provide feedback.  Currently, my “Beta Testers” post is in the top 15 with 27,958 views.

I had my answer.  Early in 2015, I created a company called Rennkit to provide a replacement electric actuation system for the wing hydraulics on 996 Turbos.  Any new company must hand out titles.  I chose President, and my wife was awarded the title of Chief Bubble Wrap Officer (CBWO).  The first “eRam” kit was installed on my 996 Turbo in March, 2015, followed closely by the two dozen beta testers.

The Rennkit website was launched to explain the infamous factory hydraulic system and failure modes and to provide details about the distinctive eRam wing actuation system.  The electric wing lift mechanism was unique enough to file for a provisional patent.  The final check was high speed track testing; which took place at our club’s annual Grattan Raceway DE event and again at another club’s Mid-Ohio Sports Car Course weekend DE event.  The highest extension version is the 4” eRam, which added more rear downforce to improved lap times. 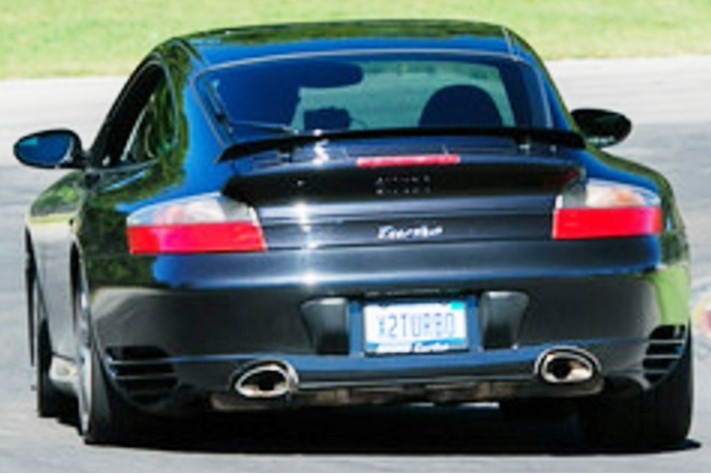 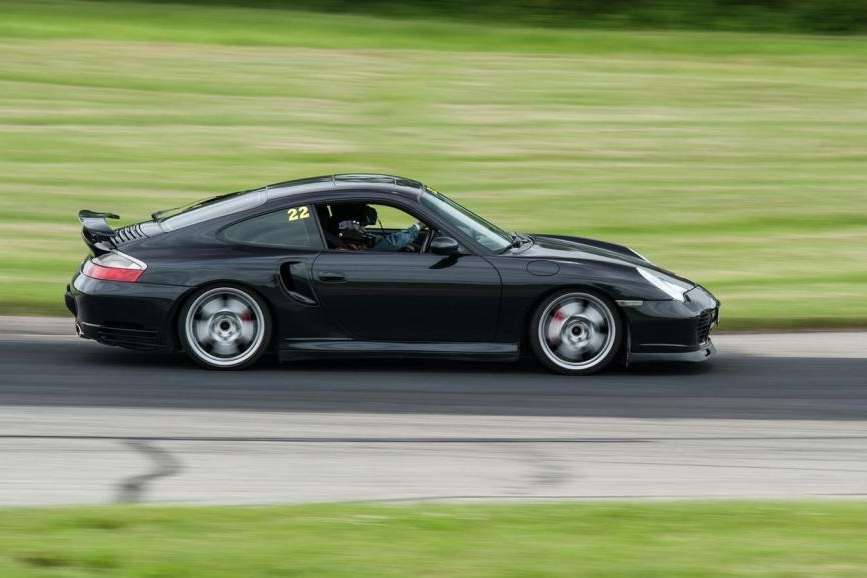 With Rennkit up and running, the next development was for the 997 turbo eRam kit, which was accomplished 6 months later.  The first 977 turbo eRam beta tester claimed 200 MPH runs with his 3” eRam kit installed.

At the moment, I don’t have any plans to develop a kit for the Carrera GT, unless that one-off request comes in.  So, what quirky part on your Porsche® should be reimagineered?

Editors Note:  If you’re interested in Dave Cooper’s wing lift mechanism you can email him at djcooper@rennkit.com or visit his website at http://www.RennKit.com. Dave offers  a 5% discount to PCA members.

This entry was posted in Tech Talk. Bookmark the permalink.