Posted on November 15, 2019 by thebeauchemins

The sky was threatening upon arrival at Moore Field located at Fort Devons in Devons, MA on September 14th,  but that did not stop the Hudson-Champlain Porsche owners who were looking forward to the Zone 1 autocross weekend. Club members that participated were Rick Beauchemin, Andy Dorman, Amanda Brinke, George Cruden, Donna Hughes, and Aaron Ambrosino 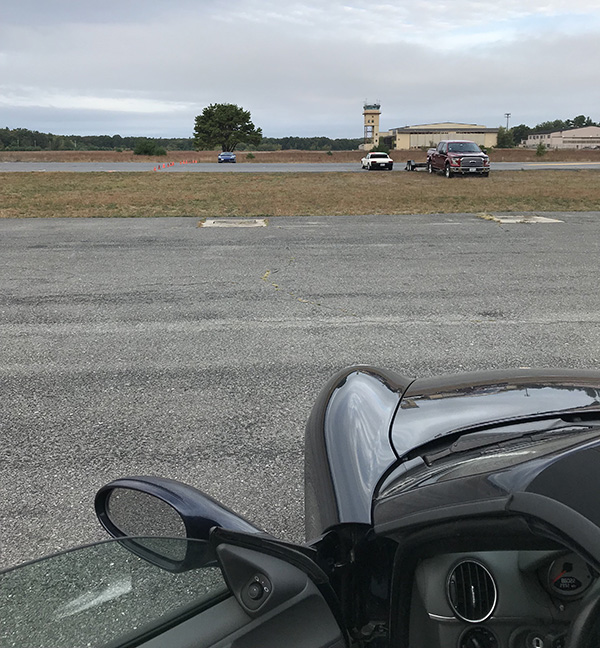 The first step was to remove everything from the car before driving to the tech inspection, which was led by our own Andy Dorman and Amanda Brinke. (That’s Andy there by the silver Boxster!) 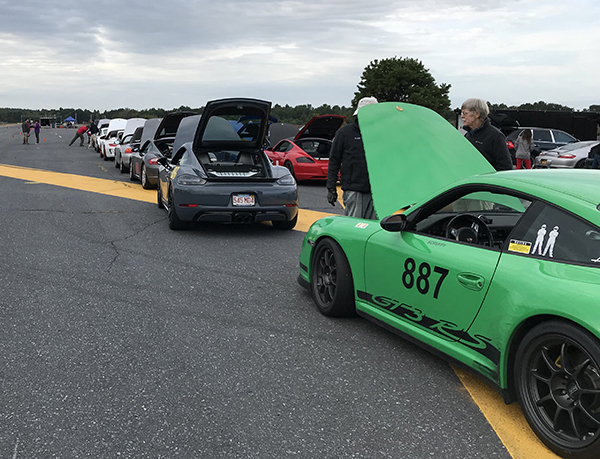 With tech inspections completed, the group was broken into two groups—one to drive and one to man the cones.  Before starting, the whole group walked the course to get a feel for the landscape. Our group was lucky because we had experienced drivers like Andy Dorman and Aaron Ambrosino to offer advice on how to drive the course. One memorable piece of advice from Aaron was “Drive fast. Take risks.”

As day one drew to a close, the group gathered for a conversation where old and new friends came together to enjoy a tasty barbeque. 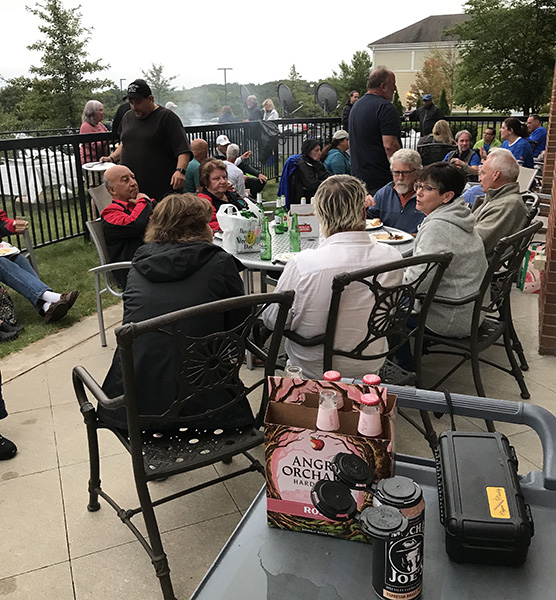 The following morning, which dawned sunny and bright, the entire process was repeated with the only difference being that the course direction reversed.

When the day wound down, awards and recognition for the fastest driver and fastest teams were announced. Donna Hughes, Andy Dorman, and Aaron Ambrosino were among those recognized.

And for those of you who were worried, please be assured that no cones were harmed over the weekend!

Our return to the Zone 1 Autocross this year was a bittersweet one, as it was an opportunity for us to catch up with old friends from afar. It was also a chance for those of us to remember the ones we have lost this year.  Last September at this two-day event the HCP team made a great showing, bolstered by the ever-confident presence of Allen Schwartz.  Allen was always cheering us on, keeping track of our times, and reveling in his steady improvement as he strove to shave “just a few more seconds” off of his time.  Over dinner he told us this was one of his favorite events, commenting on his surprise at the level the camaraderie everyone exhibited at such a competitive event.  Sadly the 2018 event was his last with us so we took a few moments at the Driver’s Meeting in the morning this year to let everyone know how much Allen enjoyed this event, how much he enjoyed the people he had met, and most of all how much he felt he learned not just about his car but about how such a diverse group of people could bond so well over a shared interest of finding the quickest path through a sea of cones.  We all miss Allen very much and this event will always remind us of those lessons he shared with us that weekend.