For his thirty-five years of work with some of the biggest names in the film industry, HCP member Phil Caruso was recently  honored by the Society of Camera Operators with its lifetime 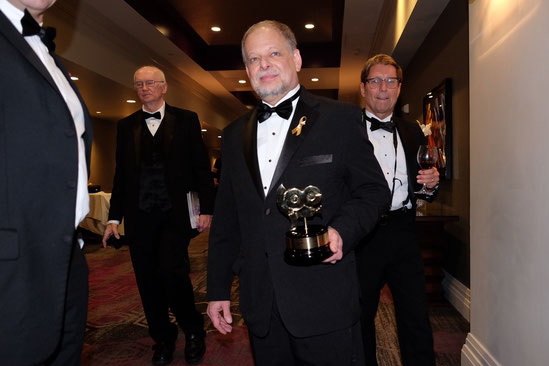 Phil Caruso with his award

achievement award.  Here’s a piece written by Paul Grondahl of the Albany Times Union that describes Phil’s experiences and accomplishments.  The photo for this post was provided by Phil.  In his words, “It is from a movie with Chris Rock, “I Think I Love My Wife”.  We staged a portion of the NY Auto Show during the summer about 10 years ago.  Porsche contributed a major portion of the background with cars and advert material.  I took the time to photograph Kerry Washington all around the cars and a crew member snapped this one of me, albeit I should have been wearing a cap.”

For more on Phil, his work and his award, visit his website:

“Photographer Phil Caruso, of Averill Park, has spent 35 years working on movie sets. He silently positions himself just out of range when cameras are rolling, behind the cinematographer’s shoulder, trying to capture lightning in a bottle through a Leica lens during the ineffable alchemy between actors. He made still images during the scenes with screen legends Marlon Brando and Robert DeNiro in their only film together, “The Score” (2001). He photographed Tom Hanks running through Vermont, New Hampshire and Maine during one marathon Sunday for the cross-country jogging sequence in “Forrest Gump” (1994). He shot stills of DeNiro and Dustin Hoffman acting in “Wag the Dog,” a dark political satire directed by Barry Levinson that wrapped in a remarkably compressed 30-day shoot. It’s Caruso’s work you see on giant movie posters at the cineplex and in promotional images that run in newspapers and magazines.

He’s worked on dozens of feature films with a stellar list of directors, including Martin Scorsese, Francis Ford Coppola, Ron Howard, Robert Zemeckis and Terry Gilliam. For the past three years, he’s gravitated to television series that film in New York City, including “Blindspot,” “The Affair” and “The Blacklist.”

His deepest creative collaborations have been with Scorsese and DeNiro, with whom he worked for many years across the span of 25 movies. They’re known as Marty and Bob to Caruso, who also served as DeNiro’s on-call photographer for years at many appearances with the Oscar winner.

On Saturday, Caruso, 60, will receive a still photographer lifetime achievement award from the Society of Camera Operators at a black-tie affair in the Loews Hollywood Hotel. Michael Keaton will receive the Governor’ Award.

He’s been having an out-of-body experience reviewing thousands of film images for a retrospective of his work that will be shown at the awards ceremony. “Oh, my God, I’ve been doing this so long I’ve forgotten more than I remembered,” he said. “I’ve got amazing memories from all the remarkable people and travel I’ve been exposed to, pardon the pun.”

Caruso is short, funny and naturally caffeinated. He’s been referred to as the class clown on set, a stand-up comic with a Nikon, Leica, Hasselblad or Fujifilm camera slung around his neck. He learned when to crack everyone up to relieve tension among cast and crew. He also understands when he needs to hit the mute button and disappear in plain sight.

“It’s about gaining trust and respect,” he said. “I try to anticipate and capture moments on the set and reactions between actors. They have to feel safe and comfortable with me. I’m the observer, careful not to interrupt that moment between the actors and the director.”

In the industry, he’s known as “Still Phil.”

“Phil’s not near the top; he is the top among still photographers,” Jane Rosenthal, a film producer and co-founder with De-Niro of TriBeca Productions film studio in New York, told the Times Union for a 1996 Caruso profile.

He’s credited as a pioneer of digital photography in the film industry, starting in the early 1990s. He’s a self-described technology geek and early adopter. Starting five years ago, he swapped out his DSLR (digital single-lens reflex) cameras for Nikon and Fujifilm mirrorless digital cameras that work in silence without a shutter’s click — crucial on a set with cameras rolling.

During a New Orleans childhood that resembled “Cinema Paradiso,” Caruso was allowed to operate his father’s 16mm film projector starting at age 7. His parents invited friends to the house on screening nights. His father, Vincent Caruso, an entrepreneur who made documentaries and also ran a catering hall, died of a heart attack at 41. Phil was 8. His world was shattered. He escaped to the movies.

“I can remember being blown away by ‘The Magnificent Ambersons,’ a black-and-white film by Orson Welles. I analyzed Welles’ lighting and angles and how he structured the set. I was 10,” Caruso recalled.

He inherited his father’s extensive collection of film and photography equipment. He earned a bachelor’s degree in communications from Loyola University in New Orleans and started a production company with two buddies in his hometown after graduation. He got his early break with Howard’s creation of Imagine Entertainment and worked on Howard’s early movies, including “Backdraft” (1991). Caruso is still in touch with his New Orleans photography pals. Several will travel to L.A. to see him receive the lifetime achievement award.

“I’m incredibly proud of Phil receiving this award. It’s an endorsement of his accomplishments from peers in the industry and that means a great deal,” said his wife, Kathy Caruso. The couple met on the set of “The Age of Innocence” (1993), directed by Scorsese. She worked as a production assistant and several scenes were shot in Troy. They married the following year.

The couple will travel to the Hollywood ceremony with their children: Vincent, a Marist College sophomore who hopes to become a lawyer; and Sarah, a senior marketing major at Manhattan College who has an internship at Paramount Pictures in Manhattan, focused on distribution. They keep it all in the family. Their children’s grandfather is Bill Kennedy, novelist and screenwriter, who lives just down the road in Averill Park.

“Bill writes the scripts, I’m on the production side and Sarah’s in distribution,” Caruso said.

This entry was posted in Featured Story, For Our Members and tagged featured. Bookmark the permalink.