We’re fresh off a 2,600-mile adventure through some of the Maritime Provinces of Canada; exploring New Brunswick, Nova Scotia and Prince Edward Island.   And, as you might imagine, there are a dozen pieces I could write from our excursion.

I thought about writing a piece professing my gratitude to the engineers of the Trans-Canada Highways through New Brunswick (especially Route 1 from the US border to Saint John, where the 110 Kilometer Per Hour signs were mentally replaced by miles per hour).  But I nixed that idea as it might be a little too incriminating.  I’ll just say this… those straightaways on perfectly paved roads permitted me to ensure my speedometer was fully functional.  And — perhaps more importantly — not a single RCMP (Royal Canadian Mounted Police) was seen the entire trip through Canada (the polar opposite of I-95 through Maine).  But, since I was in Canada, I rationalized that if (by chance) I were pulled over, surely the Mountie would understand my objective, as we’d have been two of the very few people driving via Route 1 that afternoon!

So, instead of writing that piece of my disinterest in abiding recommended speed limits, I thought I might share the exhilaration of driving The Cabot Trail, a 185-mile coastal experience in the Cape Breton Highlands of Nova Scotia.  Everything about Cape Breton Island has a direct correlation to Scotland and Ireland; native home to many of the families who settled the region, including none other than Scottish-born Alexander Graham Bell.  Many of the road signs on Cape Breton are in both English and Gaelic, and most of the live entertainment steers itself toward Celtic folk.  But perhaps the most notable comparison would be the geography; with its thick inland forests; windswept rocky shorelines; abundance of sheer cliffs, countered by low-lying beaches, inlets and fishing ports — it is as close to a replica of the Scottish Highlands as you might find anywhere in the world.  I suspect it explains the allure of settling forefathers (For those who still might not have quite the visual — but have experienced the Pacific Coast Highway along Big Sur – just add far more curves into the drive).

Being that we were there nearly a month before the tourist season begins, it felt as if The Cabot Trail were set aside for our personal enjoyment.  Apart from a pair of Mustang owners from Quebec; the twists, turns, and elevated hairpin curves were virtually ours to explore at our own pace.  Using Baddeck, a little village on Lake Bras d’Or, as our starting point, we set out on the trek; electing to go counterclockwise (giving my wife the best view of the water, of course).   From the beginning, it was simply amazing.  For the driver, you felt the suspension of the car doing what it was designed to do; an easy flow from left to right, without incurring much gravitational pull or stress.  For my passenger, it was surely scenic, but I suspect a little harrowing at times, as I, for one, didn’t recall many road signs “advising”  limits.

One moment you’d be stepping out to take a photo along an inlet or cove, and the next you’d be 1,200 feet above sea level, looking back for a snapshot of the breathtaking view of the winding road you just conquered.

However, there were a couple of drawbacks in this endeavor; particularly spots of road construction.  Most weren’t too bad, and it appeared as if we were likely the first Porsche spotting of the year for the road crews, as there was always a bit of chatter, waves, and signs of approval as we passed.  I suspect by the time season begins at the end of this month, those major projects will be nearly completed.

Throughout the drive, you enter and exit the Highlands National Park, a massive region that encompasses much of the northern tier of the island.  And, each time we entered the park, the road changes were immediately noticeable.  The park roads were nearly the quality of the Trans-Canada Highway previously enjoyed.  Along the trek, we took a diversion and went out to the northernmost point of the island; a little fishing village, called Bay Saint Lawrence.  Quaint and quiet, it featured little more than a small harbor with fishing boats; a credit union in a shack that only opened for a brief period each day, and a lunch wagon.

We backtracked from our little diversion and continued our counterclockwise trek around the tip and settled on lunch in an Arcadian fishing village, called Cheticamp; located on the west side of The Cabot Trail.  Despite much of the region being of Scottish and Irish descent, there are a few Arcadian holdovers with villages where French is the prevailing language, of which Cheticamp is one of the more developed ones.

All I can say is this, if you’re looking for a getaway with clean air, very little hustle and bustle, and one of the most picturesque drives you’ll find north of the border; take a couple days to explore Cape Breton Island; and, if you do, definitely make it a point to drive The Cabot Trail.

Editor’s note:  As Canada is celebrating it’s 150 year anniversary, all Canadian National Parks have waved visitor fees this year.  It makes for a great incentive to explore; whether it be Ontario, Quebec, or the Maritime Provinces. 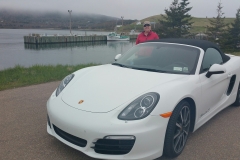 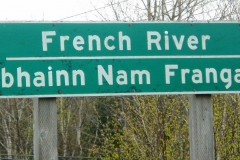 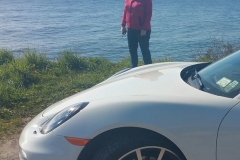 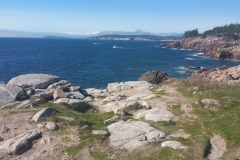 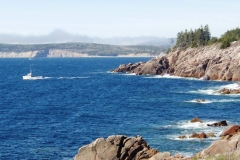 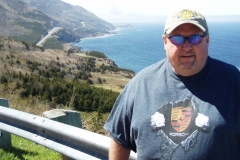 This entry was posted in Beyond our Region, Great Drives. Bookmark the permalink.