It’s not your father’s beer. If you’re of an age, it’s definitely not the beer you drank in college. Today’s beer drinking landscape has changed greatly thanks to a proliferation of craft breweries that make a cornucopia of styles from ingredients as varied as crushed raspberries and chocolate hops- consider the dehydrated tangerine cacao wheat beer brewed at the Moody Tongue in Chicago. Troy based Brown’s Brewing Co. is a player in this craft beer explosion and it was to Brown’s that the PCA-HCP ventured on its May drive.
Snaking out of the Walmart parking lot on Hoosick street in Brunswick, nine Porsches of varying breeds and vintages wound their way through the twisting back roads of Rensselaer County to Brown’s recently opened second taproom, set on the Walloomsac River in Hoosick Falls, NY.  The taproom, an attractive blend of wood, brick and natural light from large, river facing windows is the culmination of an eight year remodeling of the nineteenth century mill that originally operated on the site. The club was at Brown’s for a brewery tour and lunch; while members waited for the tour to begin, Pearson Constantino, the brewery manager and tour leader stood behind a fifty-six foot long bar constructed of wood flooring taken from Mac Tools in Pownal, Vermont pouring ales, stouts and porters for the thirsty. The beer flowed from a tap that was originally part of an eighty year old bottling machine, an indication of the blend of tradition and modernity that greets the visitor. 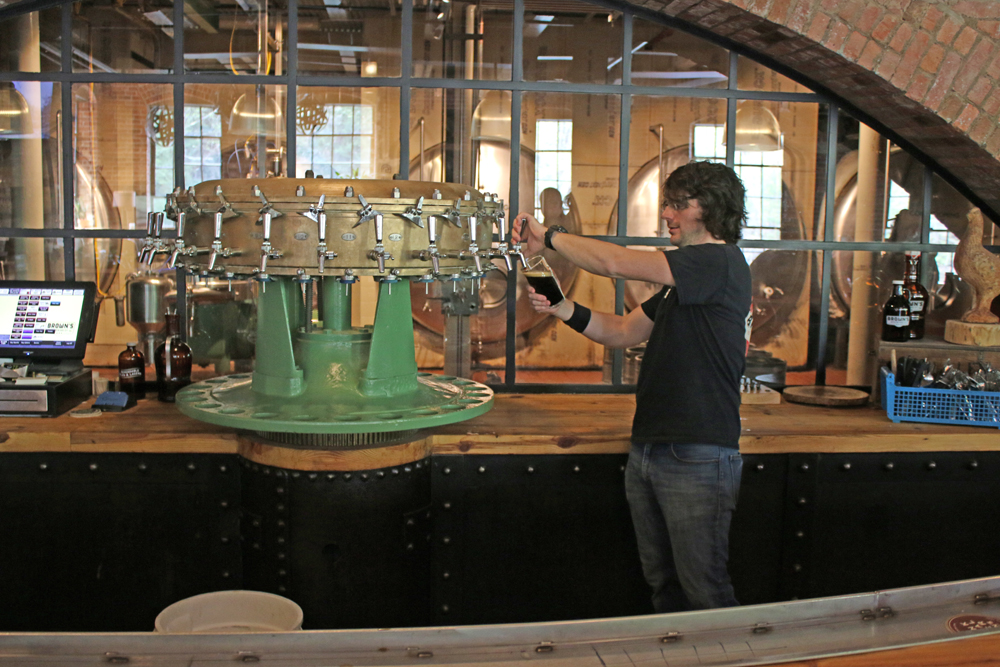 Brown’s brews up to ten thousand barrels of beer a year at its Walloomsac site; the tour gave the Club an up-close look at the process. Using a variety of malts and hops, including the classic Cascade, Peter Martin, Brown’s master brewer, creates recipes that have won Brown’s numerous awards including a Gold Medal from the Culinary Institute of America, gold and silver World Brew Cup awards and the 2008 Matthew Vassar Cup for the best brewery in the Hudson Valley. Beyond accolades for its beer, Brown’s has won recognition for its local awareness. The brewery harvests its own Hoosick Falls hops, supplementing them with hops purchased from local farmers. Brown’s also donates a portion of the sale of its Tomhannock Pilsner to the Rennselaer Landtrust whose mission is to protect the watersheds of Rennselaer County.

Combined with water from the river [in Troy, Brown’s uses water from the Tomhannock Reservoir which gives its beers a slightly different taste], the ingredients chosen by Brewmaster Martin are mixed, spun, fermented, aged and finally bottled on a 1930’s vintage bottling machine that’s seen service in ten breweries. Constantino led club members through the innards of the brewery to see how craft beer is made and then stepped from his role as tour guide, ushering the group back to the tap room to enjoy offerings from the brewery’s menu.
Driving home after lunch it was impossible not to reflect on a day of beautiful weather [Boxster drivers rejoice], fine food and beer, and some very good companionship. A thanks to Sue Corah for organizing the trip and to Louis Dahoda for planning a meandering route that included a photo-op at the Tomhannock. Perhaps a deeper thanks to Louis for his unerring sense of direction without which many of us would have been forever lost in the hinterlands of Rennselaer County.