Covered bridges and a brewery

This past Sunday, I decided I wanted to accomplish three things… 1) Go for a lengthy drive;  2) Enjoy lunch at a relaxing, no rush place at a scenic location; and 3) Track down several covered bridges in our area along the way.

I’ve always been enamored with wooden covered bridges; most lasting decades beyond their uncovered counterparts.  I suspect these bridges were designed not only to protect the timber from the harsh elements of winter but to provide a safer passage for horses and pedestrians crossing; as many pre-date the mass popularity of the automobile.  As there are few in Upstate New York, and Vermont might have perhaps the largest density of them of any state (110 covered bridges within the state), I figured I could at least encounter a handful on a quick run through the countryside northeast of Albany.

So I convinced a friend to roll out his sports car and follow me on my quest.   We took off heading north toward Mechanicville, crossing the Hudson River and heading east on Route 67, which is a scenic stretch of rolling hills and sweeping curves that run along the Hoosic River (spelled differently from the similarly pronounced town of Hoosick).  As we entered the hamlet of Buskirk, we took a left to encounter our first covered bridge – the aptly named “Buskirk’s Bridge”, built in 1850 and one of only 29 such bridges in New York.  But what might give it even greater character, is a sign under its name that declares a “$25 fine for driving on this bridge faster than a walk”.

From there, we traveled along River Road, the north side of the Hoosic River, until it intersected back onto Route 67.  This eventually brought us to our destination for lunch; Browns Brewery, at the crossroads of Routes 67 and 22, alongside the Walloomsac River, in North Hoosick.  Nestled underneath a large bridge (currently undergoing expansion), the brewery is in an old valve factory, built alongside a waterfall.  This brick structure is the site of where all Brown’s barreled and bottled beer is produced (http://brownsbrewing.com/walloomsac-taproom/).  Two years ago, this was also the destination of my first HCP D&D, and I’ve been going back several times a year since.  The brewery has expanded with a full kitchen with a variety of menu items and no shortage of beers to sample.

After a relaxing lunch, we set back out on the roads to find more covered bridges.  Getting back onto Route 67, we traveled east toward Bennington, Vermont; passing the famous Bennington Battlefield (located in NY).  Shortly after crossing into Vermont, we turned down Harrington Road, which connected with Murphy Road, the site of our next bridge – “Henry Bridge”; a much smaller single-lane bridge, but in pristine condition.  After crossing the Henry Bridge, we continued on Murphy Road where we encountered “Paper Mill Bridge”.  This bridge leads you into Bennington and connects to Route 67A.  After a short jaunt to the east, we turned onto Silk Road, which led us to the final bridge on the trip – “Silk Bridge”.  Like Henry and Paper Mill, Silk also crosses the Walloomsac River.  It was refurbished in 2000 and, much like the Henry Bridge, is pristine.

After satisfying my curiosity of covered bridges, there was one more Bennington landmark to sort out.  If you’ve ever approached Bennington from a distance, you’ve likely seen an enormous obelisk towering over the city.  That is the Bennington Battle Monument, the tallest structure in the state of Vermont at 306 feet.  It is accompanied by the statue of Seth Warner, a Revolutionary War hero.

After navigating our way around the monument, we traveled into Bennington where we connected with US-7 (not to be confused with Route 7 which leads west to Troy).  We took US-7 south toward the Berkshires, where we then rolled through the Massachusetts town of Williamstown.  This particular stretch of US-7, between Bennington and Williamstown, was well worth the drive, as the vantage point looking down into the various valleys below, was impressive.  From there, we connected to Route 2, which took us through the Taconic Trail State Park and into rural Rensselaer County.  A beautiful drive in its own right; although Route 2 has stretches in need of repair work.

All-in-all, it was 2.5 hours of driving time with a nice hour stopover for lunch to break up the drive. 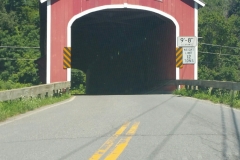 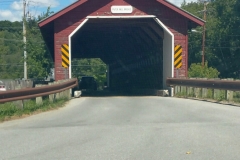 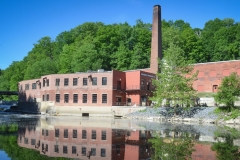 This entry was posted in Great Drives. Bookmark the permalink.